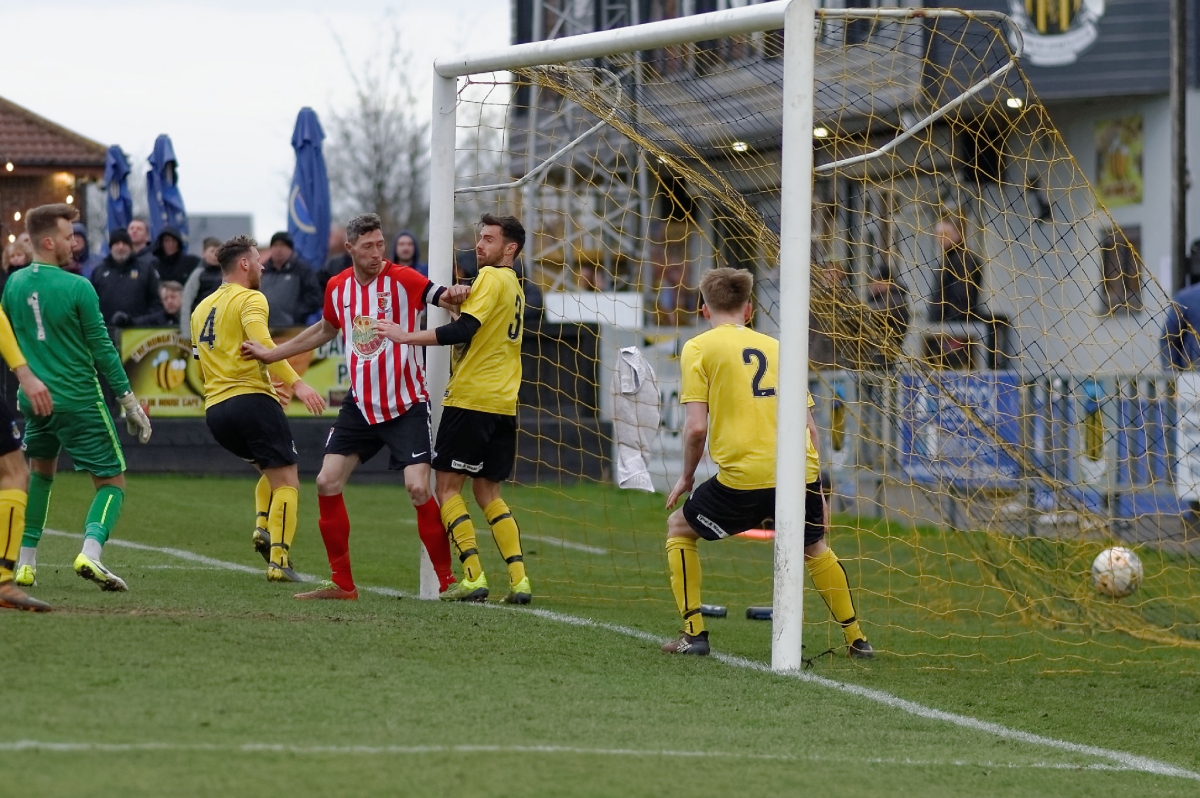 Going into the match, both sides were in good form in the league, with Hebburn unbeaten in their last five, including the remarkable 9-0 win at Whitley Bay a fortnight ago. RCA, meanwhile, are on a terrific run in the league, winning the last five matches, and moving up to sixth place in the league table in the process, and with the chance to match last season's fourth-place finish still very much in sight.

RCA made two changes to the side that won with a stoppage time goal at Newton Aycliffe - Michael Charlton and Mark Davison replaced Thomas McAloon and Dominic Moan, both of whom took places on the bench.

The match got off to an uneventful start, with both sides trying to get to grips with strong winds blowing across the pitch. In the 9th minute, RCA had the first real attempt on goal as O'Neill fired in a shot from 20 yards which flew wide of the post. Seconds later and RCA were again on the attack - Larkin did well down the left chasing a through ball before playing in Page, whose fierce half-volley from the edge of the Hebburn penalty area was again narrowly wide.

In the 20th minute, Hebburn had their first meaningful attempt on goal after a dangerous cross to the far post from Richardson just eluded the onrushing Robson with the goal gaping. Nine minutes later and Hebburn took the lead - Read made a good run down the right touchline, before crossing into the RCA penalty area. The ball was half-cleared to Armstrong, who smashed the ball high into the net from eight yards.

With ten minutes until the interval, good play by Larkin and Davison forced a corner kick for RCA which was cleared. Five minutes later and RCA had a good chance to equalise as a corner kick from Lavery was flicked on by O'Neill at the front post, but Preston's header was comfortably held by Jennison. And then, seconds later, a deep cross into the Hebburn penalty area was mishit by Larkin and again comfortably collected by Jennison.

Six minutes into the second half and the home side doubled their lead as a ball in from the left caught the RCA defence a little flat-footed and Suddick had time and space to fire into the net from just inside the penalty area, leaving RCA with an uphill task to take anything away from the match. On the hour mark RCA made a first substitution, with Dylan Elliott replacing Mark Davison.

Just three minutes later and RCA were back in the match - Page made a driving run down the right and forced a corner kick. Lavery whipped in a terrific corner and Swansbury rose, salmon-esque, at the far post to head home from very close range with a typical towering header. In the 68th minute, RCA made a second substitution, with Thomas McAloon replacing Michael Charlton. Seconds later and Howard made a good run down the right, before cutting in and firing across the face of the Hebburn goal. Five minutes later and RCA kept up the pressure with Page, who, evading three challenges, drove to the edge of the Hebburn penalty, before playing in Elliott who fired across Jennison, but narrowly wide of the far post from 20 yards.

As the match entered the final ten minutes, Hebburn launched a quick counterattack as substitute Dibb-Fuller made a good run down the left before cutting into the RCA penalty area and curling in a terrific effort which crashed against the face of the crossbar and rebounded to safety. One minute later and Hebburn were awarded a free-kick - Richardson hammered in the free-kick from all of 30 yards which smashed off the underside of the crossbar and over the line. A brilliant strike! Two minutes later and Storey fired in an attempted lob from just inside the RCA half which the backpedaling Pocklington held under the crossbar.

In the 83rd minute, RCA gave hope for a grandstand finish as the impressive Howard again did well down the right before playing in O'Neill on the edge of the Hebburn penalty area. O'Neill then teed-up McAloon, who produced a super, low finish from 20 yards into the bottom corner. The big finish from RCA, however, failed to materialise, and, in fact, it was the Hornets who had further chances to increase their lead as first, Pocklington made a terrific save from a Richardson header, and then the RCA ‘keeper was again called into action, this time to make a more comfortable save from a shot from Robson. In the final minute RCA made their final substitution, with Dominic Moan replacing Craig Hodgson.

An entertaining second half from both sides, but RCA's five-match winning streak in the league comes to an end. RCA drop to seventh in the table but remain in touch with Hebburn in fourth, with a four point deficit to make up.

Next up for RCA is a home match as Consett visit Meadow Park on Saturday, 9 March, with a 3pm kick-off.