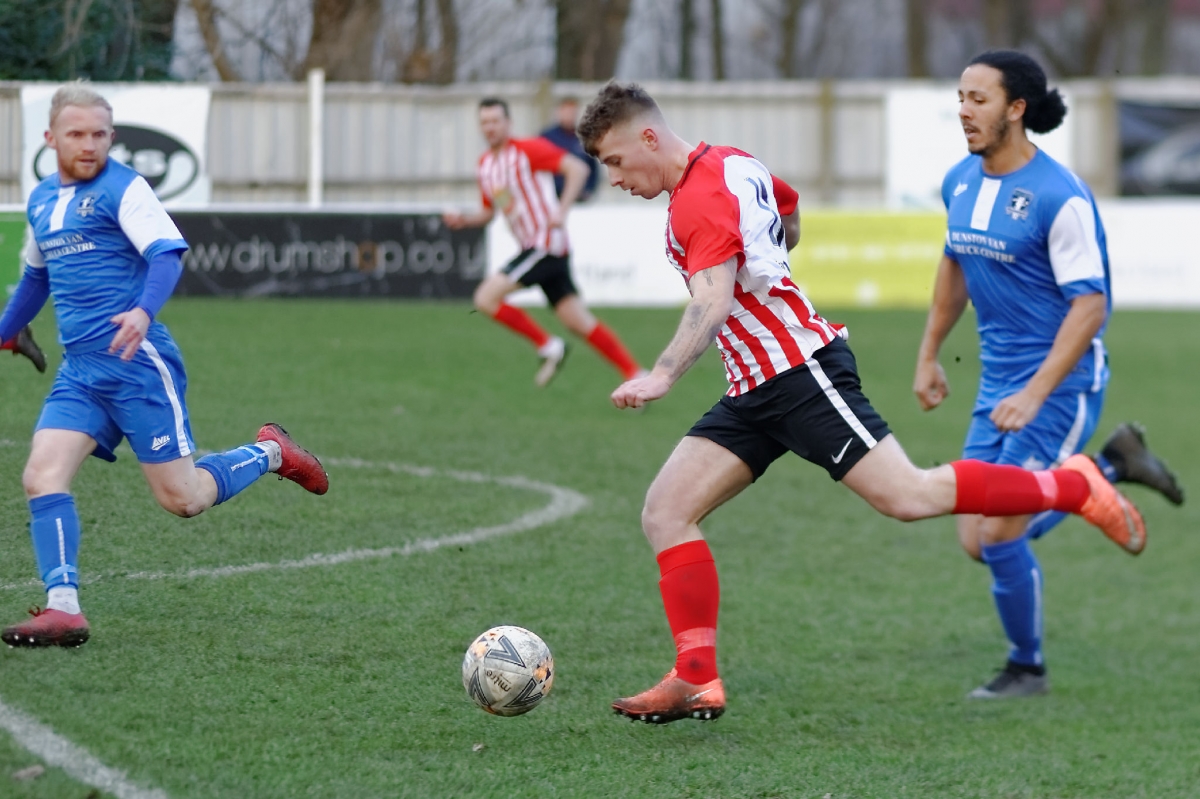 Thomas McAloon fires in a first half shot.

RCA made two changes to the side that lost last Saturday to West Auckland - Jordan Lavery, making his full RCA debut, replaced the injured Ross McNab at left back, and Thomas McAloon started on the left wing in place of Dominic Moan.

The opening exchanges saw little by way of goalmouth action, with most of the play in midfield. In the 14th minute, however, Dunston won a corner on the left which was half cleared by Swansbury, and Heslop put away the loose ball from close range, but was flagged offside. One minute later and Pearson did well down the right before crossing low to the edge of the RCA penalty area, where Elliott fired in a fierce shot that was superbly blocked by Swansbury.

A couple of minutes later and RCA had their first sight of goal as a dangerous, low cross from Charlton was dropped by Dryden, but unfortunately there wasn't an RCA player on hand to knock in the loose ball and it was hacked clear. In the 18th minute, the home side were back on the attack as a cross from the left was headed over at the far post by Brooks, who sustained a head injury in the challenge for the ball and had to be substituted after a few minutes of treatment.

Midway through the first half and RCA produced a good move down the left involving Lavery, Page and Hodgson, and it was Hodgson who drove to the edge of the Dunston penalty area before firing in a shot that was charged down and cleared. In the 26th minute, RCA were awarded a free-kick two yards from the Dunston penalty area after a foul on Larkin. Lavery fired in a terrific free-kick which skimmed the crossbar and behind for a goal-kick.

On the half hour mark, RCA had another great chance to open the scoring, and it was route one football as Pocklington cleared into the Dunston half, where O'Neill cleverly flicked the ball on and into the path of Larkin, who, without breaking stride, fired in a fierce half-volley which flew narrowly wide of the post. Four minutes later and Dunston were awarded a free-kick on the left that was whipped in by Marrs and tipped over the crossbar by Pocklington at full stretch for a corner which was cleared.

With five minutes to half-time, RCA were awarded a free-kick after McAloon was tripped driving towards goal. Lavery - in a similar position as previously - again stepped up but this time curled the ball just over the crossbar. In stoppage time, the home side took the lead with a slick counterattack - RCA lost possession high up the pitch and Elliott raced through central midfield and deep into the RCA half, before playing in Fitzpatrick who crossed low and Heslop slid the ball home from close range.

RCA began the second half strongly and equalised in the 56th minute after winning a corner kick on the right - Lavery whipped the ball in at pace and it cleared everyone before dipping and rebounding into the net off the far post. Perhaps a slightly fortuitous goal, but no more than RCA had deserved on the balance of play. Three minutes later and substitute Nellis made a good run down the left, cutting in along the byline, before delivering a low cross which went right through a crowded six-yard area and out on the far side.

In the 62nd minute, RCA made a double substitution, with Aaron Croft replacing Michael Charlton, and Mark Davison coming on for Sam Lilley. Two minutes later and Davison fired in a shot which was saved by Dryden. The ball was then half cleared to Larkin, who fired wide from the edge of the penalty area. In the 72nd minute, the home side had the ball in the net after Pocklington spilled a Nellis shot, but the tap-in was flagged for offside.

As the match entered the final fifteen minutes, RCA were unlucky not to take the lead - O'Neill did well down the left, before playing the ball inside to Davison on the edge of the penalty area. Davison looked up, turned, and fired in a delicious curling shot which crashed against the outside of the post and out for a throw-in.

Ten minutes from time and Dunston had a great chance themselves to retake the lead as Fitzpatrick was released in on goal, but his shot from just inside the penalty area was superbly smothered by Pocklington. Just three minutes later and Dunston took the lead as a low cross was played in from the right and Preston could only slide the ball into the net trying to avert the danger. With a minute remaining, RCA made a final substitution, with Kyle Davis replacing Thomas McAloon.

There was still time for a huge talking point as the match moved into stoppage time, after a cross from the left was met with a powerful header from O'Neill which was brilliantly clawed away on the goal line by Dryden, amid loud shouts from RCA players, management and supporters that the ball had crossed the line.

A disappointing result in a fixture that has seen good wins for RCA in the last couple of seasons. RCA had plenty of chances to take something from the match, including rattling the woodwork in each half, only to lose to an extremely unlucky own goal.

Next up for RCA is the third visit in a row of West Auckland Town to Meadow Park, on Saturday, 19 January, with a 3pm kick-off.