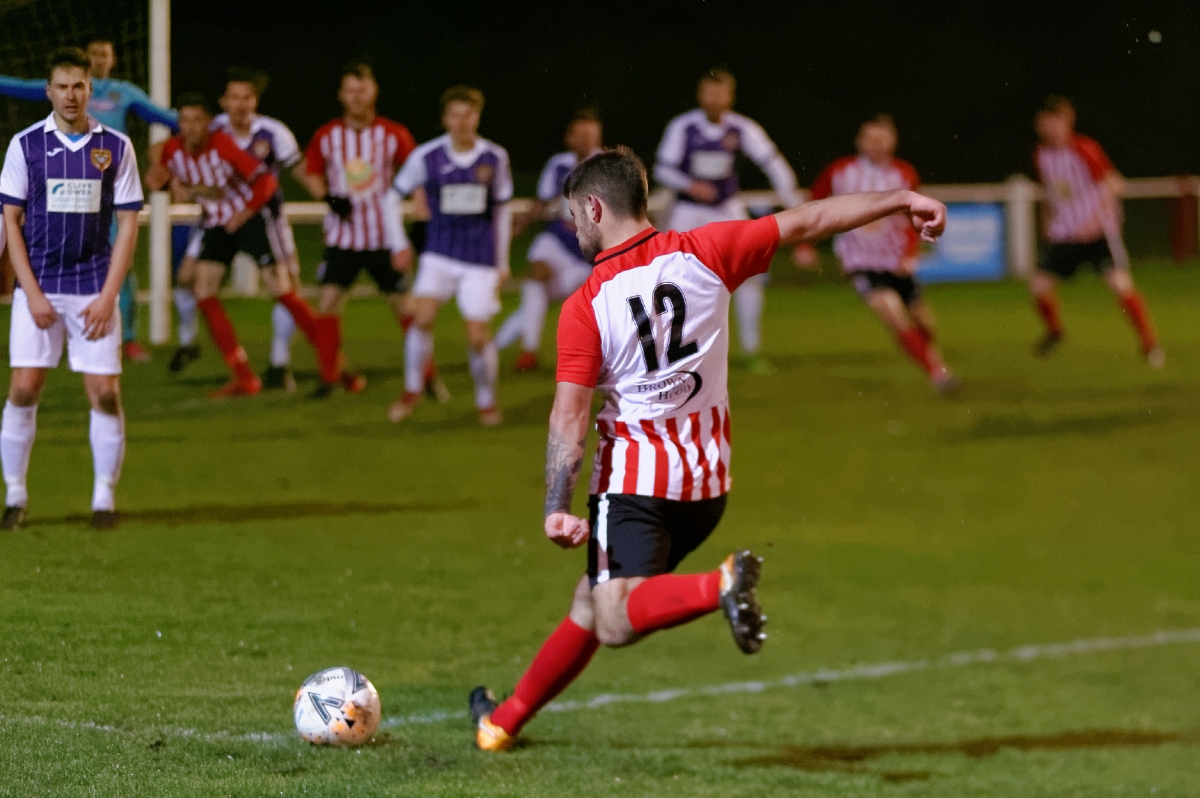 Dominic Moan whips in a free-kick during the second half of the match.

The RCA management team were forced to make three changes to the team that lost to Stockton Town in the League Cup on Wednesday. Larkin replaced the injured Preston, O’Neill came in for C.Davis and McAloon came in for Howard who was unavailable due to sickness. The team reverted to a 4-4-2 formation.

The match kick off in dry but freezing cold conditions with the wind blowing diagionally across the pitch.

As if to warm the crowd up the game started in pulsating fashion as RCA took the lead within 70 seconds. A McNab throw in to McAloon was controlled and crossed into the box where O’Neill was on hand to deftly glance a header past Atkinson and into the bottom corner of the net.

RCA continued to attack with the advantage of the slope but it was RCW who equalized in the 7th minute when Trewick intercepted the ball and fed it to Devlin on the left wing, his pace took him past Larkin and Hodgson before he fired in a low shot which beat Tsapalos at his near post.

Within a minute RCA were back in front. From the kick off, the ball was played by Elliott to Charlton on the right, his cross was half cleared by Lay but fell to K. Davis who somehow managed to manufactured an opening before hitting a right foot shot from the edge of the penalty area into the corner of the net past the despairing dive of Atkinson.

It was asking a lot in these conditions for the tempo of the game to remain this high and the game eventually settled down as the two teams got to grips with each other’s game and started to cancel each other out.

On the half hour mark Dylan Elliott sustained a nasty ankle injury and RCA were forced to make a substitution bringing on Moan to replace him.

In the 33rd minute, RCA should have increased their laead when O’Neill beat the offside trap and burst into the penalty area where brought down by Atkinson and the referee had no hesitation in pointing to the spot. Larkin stepped up to take the penalty but Atkinson guessed right parrying the shot away, the ball fell to Charlton who sent the ball goalward only to see Atkinson pull off another terrific save before the ball was eventually cleared.

The double save seemed to lift RCW and two minutes later they were level with an almost carbon copy of their first goal, a through ball from Riding found Devlin, he again outpaced the RCA defence before this time rounding Tsapalos and slotting the ball into the net.

Once again RCA showed their character as they equalized with their next attack, McAloon was fouled on the edge of the box and K.Davis stepped forward to curl a delightful shot into the net via the angle of the post and crossbar.

In a frantic last five minutes of the half, and with the weather deteriorating by the second, RCA could have sewn up the game, K Davis shot high from a promising position and then, when Charlton burst into the area to get on the end of a pass from Moan his shot brought another spectacular save from Atkinson.

In the final minute of the half RCW were awarded a free kick which Devlin took but sent his effort disappointingly wide of the target by some margin.

A torrential Rain / Sleet storm welcomed the players for the start of the second half.

In blizzard like conditions it was hardly surprising that the quality of football was never going to reach the excitement levels of the first half.

However, RCW managed to equalize in the 51st minute when a long ball forward from Riding seemed to get caught on the wind and fell into the path of Rae who chested the ball forward before cooly passing the ball beyond the reach of Tsapalos and into the net.

With the advantage of the slope and the wind RCW looked to get in front for the first time in the match but some resolute defending by Swansbury and Hodgson kept the visitors shooting options to a minimum.

RCA retook the lead in the 58th minute when McNab found McAloon on the right, the winger with a little bit of trickery beat two defenders before crossing low into the box where O’Neill was on hand to stab the ball home.

The conditions worsened as the game progressed and the final half hour was played in a blizzard as sleet hail and rain lashed the Meadow Park pitch.

Both sides continued to press forward and in the 75th minute RCW had a succession of corners, the first saw a shot from Rae deflected wide and the second was whipped into the box and was cleared by Hodgson amid a loud appeal for a penalty which was waved away by the referee.

Within two minutes RCA also had a penalty appeal turned down when O’Neill seemed to be hauled to the ground by Lay but again the referee waved away the appeal.

The closest RCW came to equalizing was in the last 5 minutes when Wallace picked up a pass from Lay but his effort was scuffed wide of the upright with only the keeper to beat.

Deep into injury time McAloon should have increased RCA’s lead when he was clean through on goal with only Atkinson to beat he fired straight at the RCW keeper, the ball rebounded to K. Davis but he denied himself the glory of a hat trick by firing wide with the goal at his mercy.

This was a massive 3 points for RCA as they moved up to 7th in the league.

Next up for RCA is West Auckland Town FC in the Durham County Challenge Cup match on Tuesday night 7.30pm Kick Off.