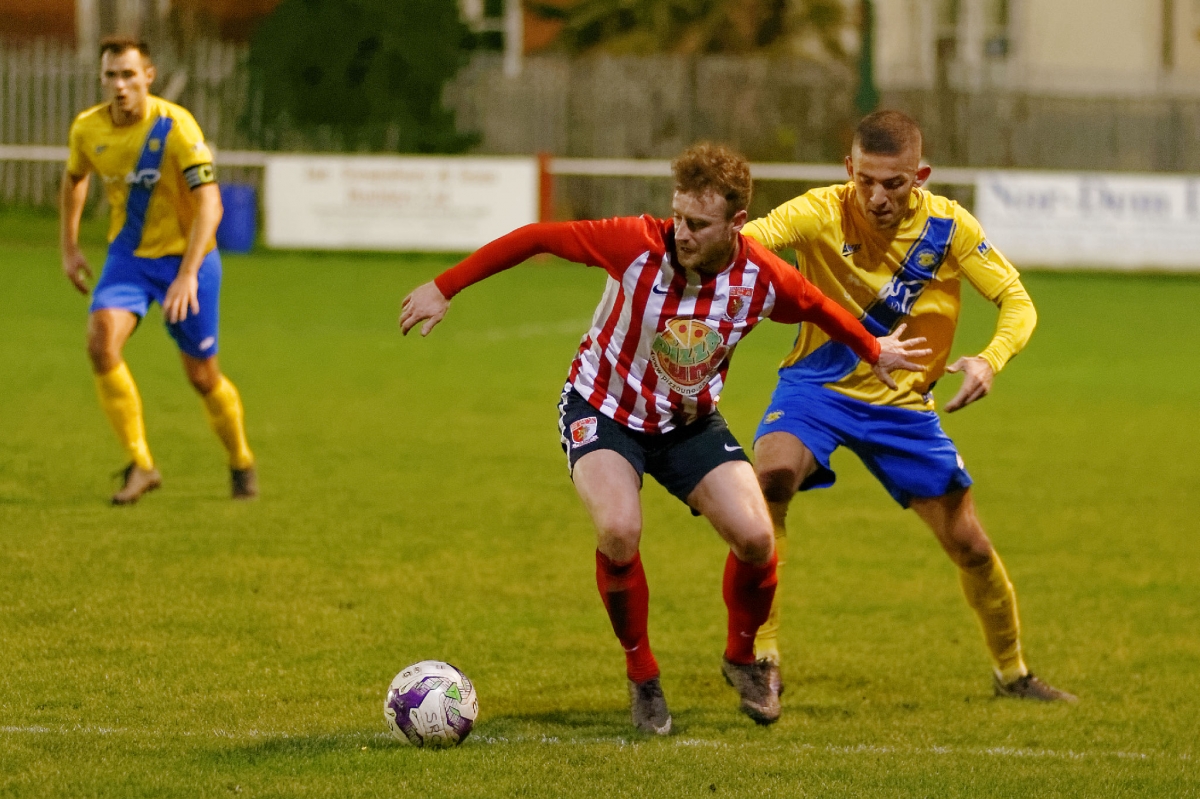 Clayton Davis in action during the first half of the match.

Both managers made changes from the starting eleven from Sataurday, for RCA in came Clayton Davis, McNab,Swansbury and Page. While Stockton brought in Moody and Cossavella.

RCA also made a change to their formation with the management team deciding that a 3-5-2 formation would best counter the midfield threat of Stockton.

Stockton elected to kick up the slope in the first half and it was RCA who had the first attack with Page cutting inside the area but his effort on goal was blocked.

In the sixth minute Stockton were awarded a corner which was taken by Craggs, whipping the ball in low to the near post, where Coulthard got a foot to the ball but could only steer it wide of the upright.

A long ball forward from Swansbury was controlled by Howard who slipped the ball to K. Davis inside the penalty area, his squared ball towards Page was cut out by Cossavella and cleared. The home team were building a bit of pressure at this point and a minute later a solo run by Page forced a good save from Moody.

RCA should have opened the scoring in the 15 minute when Charlton and Elliott combined to send C. Davis clear of the visitors defence, unfortunately his attempt at a setting up Page saw a weak cross easily saved by Moody.

With the two teams cancelling each other out in midfield they resorted to long ball tactics and both defences looked well capable of coping with this tactic.

The deadlock was broken in the 32 minute when Stockton were awarded a dubious looking freekick on the right. Craggs again whipped in the cross towards the near post where McNab in trying to clear off the line sliced the ball into his own net.

It was Stockton who finished the half the stronger, a Risborough free kick was hooked clear by Swansbury and then a surging run by Bulmer was found by Coleman but Tsapalos was quickly off his line to smother the danger.

In the final minute of the half  RCA were awarded a freekick which McNab took, hitting the ball toward goal, it was cleared off the line by Nicholson, the loose ball fell to Charlton who blasted the ball over the bar.

RCA started well in the second half and in the opening minute were unlucky not to equalize when a cross into the box from Elliott was met at the far post by C Davis but he headed wide from 5 yards out.

Within two minutes they were back on the attack this time Charlton found space on the right and cut the ball back to Page but his effort went over the bar.

As with the first half the game became bogged down in a midfield battle with neither team able to really dominate.

RCA were forced to make a tactical change in the 54 minute when Ross Preston limped out of the game and was replaced by McAloon. Reverting to a 4-4-2 formation almost brought immediate rewards when in the 55 minute a cross into the box by Howard was met at the far post by Elliott but his shot went wide if the upright.

Stockton's first real effort on goal was on the hour mark when Craggs picked up a pass from Woodhouse surged forward before unleashing a shot which went over the bar.

In the final 10 minutes RCA threw caution to the wind as they looked for an equalizer and it almost came in bizarre fashion. A freekick from Elliott was headed back across goal by Page, the ball fell to Charlton who spun a shot in one movement, the ball hit Nicholson and rebounded off Charlton’s knee into Moody’s arms inches from the goal line.

As RCA pushed forward they left gaps at the back and in the final minute Stockton had a great chance to put the game to bed when McNab found himself outnumbered as Coleman and Hayes surged forward. The RCA defender stood his ground and managed to avert the danger with a well timed intervention.

This was by no means a classic as both teams cancelled each other out in the end the little bit of luck went Stockton’s way on the night.

Next up for RCA is the little matter of a local derby on Saturday when RCW visit Meadow Park.