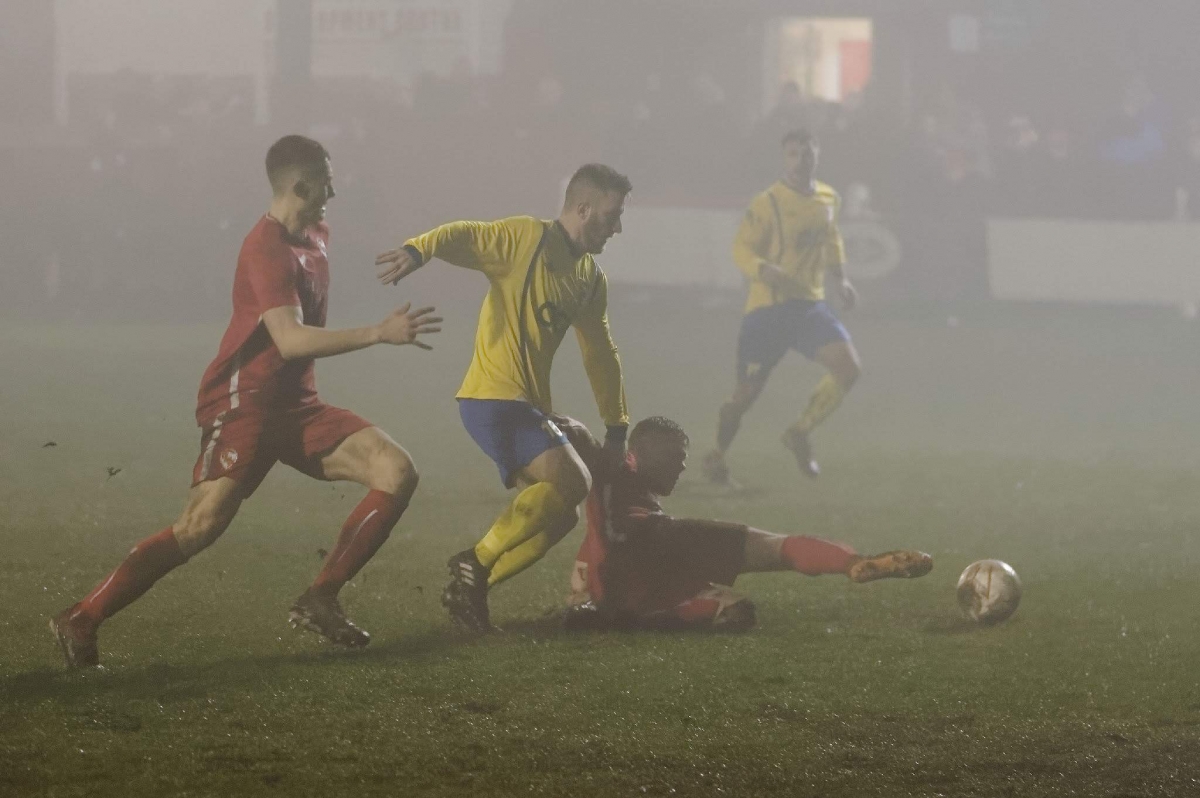 In recent years Shildon have been a bit of a bogie team for RCA who had not recorded a victory against them for almost five years.

For today’s match the RCA management team made two changes to the team that drew with Penrith last week, bringing in Clayton Davis for John Jury and Dominic Moan to replace Colin Larkin who was injured.

The opening 15 minutes of the game saw little in the way of goalmouth action as both teams weighed each other up, Shildon had a lot of possession in this period, but they didn’t cause any real problems for the RCA defence.

Unfortunately, in the 18th minute Mark Davison limped out of the game, after a heavy challenge by Moore, and was replaced by Elliott.

The first real effort on goal came five minutes later when Carling sent a delightful ball forward to Earl who rifled in a shot which Tsapalos did well to save. Shildon’s possession was starting to pay off as they pressed forward looking for the opening goal.

Earl was at the centre of the next attack when he picked up a pass from Ellison, turned and laid the ball into the path of Hird whose shot was well saved by Tsapalos.

On the half hour mark Shildon were awarded a free kick which Carling took. His shot was blocked and fell to Moore who drove his shot straight at Preston and the ball fell to McNab who cleared the ball forward to O’Neill who ran past the last defender but his shot was deflected for a corner. Elliott took the corner which was met by Preston, but his header was cleared by Heywood.

The deadlock was finally broken in the 36th minute when a corner on the right was headed clear by Swansbury. The ball fell to Moore who smashed his shot into the bottom corner of the net from 25 yards out.

RCA responded with a little pressure of their own in the final five minutes of the half. An Elliott corner was headed clear by Greulich-Smith, then a freecick from Elliott was curled narrowly wide of the far post before a great through ball from McNab was well read by Newbrook who smothered the ball before O’Neill could get a foot to it.

Whatever was said at half time to the RCA players obviously did the trick as they came out for the second half a completely different team .

They were quickly into their stride and put Shildon on the back foot from the off. O’Neill received a pass from Moan and his shot from inside the area was blocked by Carling.

Within a minute RCA were level. Swansbury intercepted a pass on the half way line before threading an inch prefect pass to Page who took the ball in his stride before rounding the keeper and firing into the net.

The reversal in performance was astounding as RCA poured forward time after time. In the 55th minute a Charlton free kick was flicked on by Moan before being punched clear by Newbrook under pressure from Swansbury.

In the 60th minute Hodgson was injured and had to leave the field, while RCA were down to 10 men Shildon built their first attack of the second half when Moore had a shot blocked and in the goalmouth scramble that followed several shots were blocked as RCA defenders put their bodies on the line and eventually the ball was cleared for a throw in allowing Kyle Davis to come on replacing Hodgson.

Shildon looked to take advantage of the situation and pressed forward, substitute Blackford was causing some problems and almost gave the home team the lead in the 66th minute when he latched onto a clearance from Preston and sent a thundering low shot towards the bottom corner but Tsapalos managed to get both hands to the ball.

Back came RCA. A build up which included Swansbury Elliott and O’Neill saw the ball switched out to the right wing where Charlton with a clever back heel found Moan who skipped past his marker before forcing Newbrook into a terrific save at the expense of a corner. Moan took the corner which was headed narrowly over the bar by Swansbury.

In the 75th minute RCA took the lead when Preston won a tackle on the halfway line, Elliott picked up the loose ball and played it forward for O’Neill who, cutting in from the right, fired in a shot which beat the keeper and the despairing lunge of Duell could not stop the ball finding the net.

The hosts fought back pushing players forward and in Blackford they had someone who was willing to run at the heart of RCA’s defence.

In the 80th minute Shildon equalised and it came after a spell of pressure saw a shot from Moore blocked and cleared to the edge of the box where Duell was on hand to drive a low shot past the diving Tsapalos and into the net.

The match was set up for a thrilling final ten minutes. An Elliott freekick rebounded off the wall and Charlton was on hand to fire in a shot which was well saved by Newbrook. At the other end Tsapalos was forced to make a last ditch save from Gruelich-Smith who, up to this point, had been well marshalled by Clayton Davis.

With the game deep into the four minutes of added time and seemingly heading for extra time, RCA were awarded a free kick on the edge of the penalty area. The ball was floated into the box where Swansbury managed to get a head and it dropped kindly for Kyle Davis at the near post and the RCA substitute lashed the ball into the roof of the net sending the visitors into the next round of the competition.

This was a huge performance by the lads. From 1 – 16 they did Ryhope proud with a stunning second half.