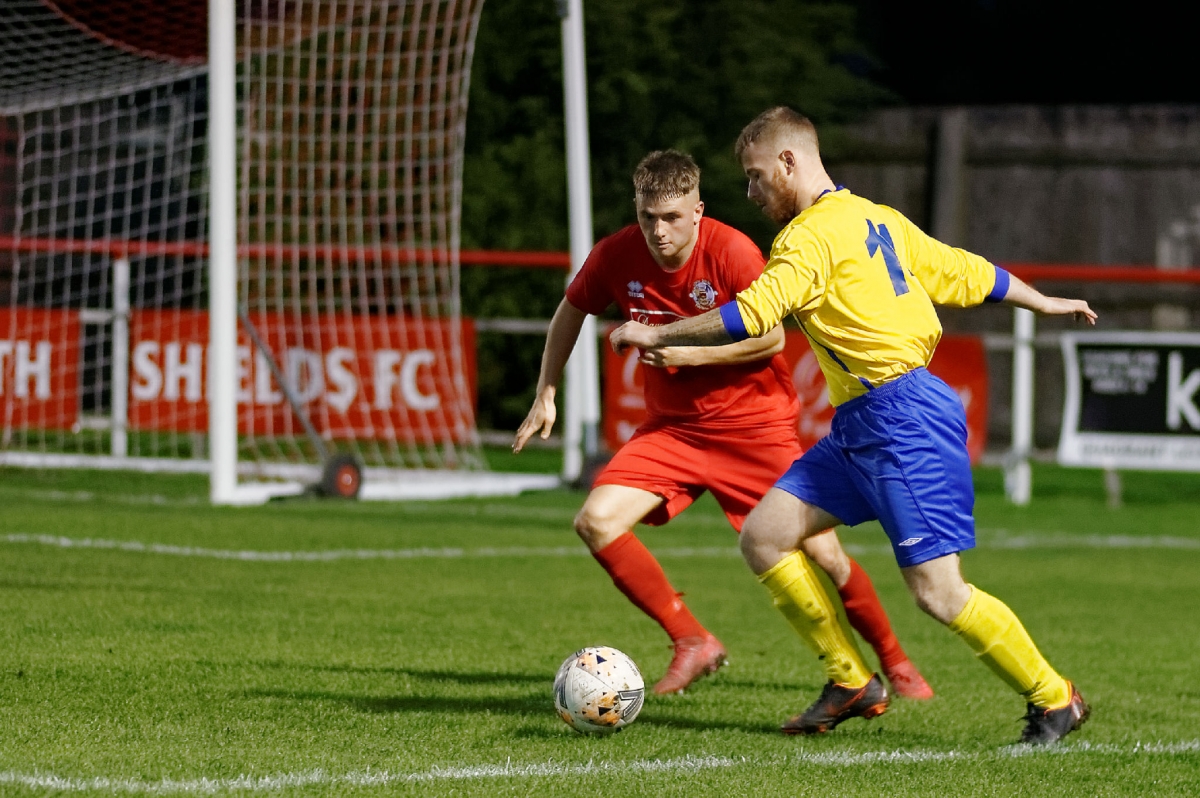 Recent signing Thomas McAloon on the attack during the second half of the match.

Following the excellent victories against Sunderland AFC in the Durham County Challenge Cup and at Garstang in the Buildbase FA Vase last Saturday, Sunderland RCA returned to Northern League action this afternoon with a trip to North Shields.

RCA made two changes to the side which won at Garstang last Saturday - Clayton Davis replaced John Jury at right back, and Michael Charlton returned to the side in place of the injured Luke Page, with Nathan O'Neill slotting into central midfield.

In the early minutes, North Shields were awarded a free-kick for a foul by Swansbury. From the free-kick, the ball was deflected behind for a corner, which was headed over the crossbar by Coppen from close range. One minute later and RCA were so close to opening the scoring as a free-kick from inside the centre circle was flicked towards the bottom corner by Preston, but Purvis clawed the ball away with a brilliant diving parry. Swansbury drove the loose ball towards goal, and again Purvis pulled off another terrific block.

In the 11th minute the hosts took the lead - a perfectly weighted ball was played in behind the RCA back line for Johnston, who raced to the edge of the RCA penalty area, before slotting the ball through the legs of Tsapalos and into the net. Five minutes later, and RCA were forced into a first substitution as Dominic Moan suffered a hamstring injury and was replaced by Kyle Davis. A couple of minutes later and RCA created another good chance as Charlton switched play to the left for O'Neill, who played in McNab, whose cross was volleyed over the crossbar by Kyle Davis.

On the half hour mark, both sides had appeals for a penalty kick turned down by the referee. Five minutes later and RCA were again pressing hard for an equaliser as a free-kick on the halfway line was flicked on by Swansbury and again Purvis turned the ball around the post with another smart save. From the corner, there was pinball in the North Shields penalty area before the ball was finally hacked clear. With half-time approaching, RCA were dealt a hammer blow as Shields doubled their lead with another slick counterattack - Ormston broke down the left, before cutting into the RCA penalty area and squaring the ball to the far post, where Johnston was on hand to score his second with a confident finish.

It took just six minutes of the second half for RCA to get a foothold in the match - a cross from the left was flicked on by O'Neill at the front post and Davison slid in to guide the ball past Purvis and into the net. Just before the hour mark, Shields had two great chances to reinstate their two-goal cushion: first, Taylor broke clear and his shot was well blocked by Tsapalos. Then, barely a minute later, Taylor played a good ball in from the right and Johnston's shot was again blocked by Tsapalos. And, two minutes later, RCA had two great chances themselves to equalise as a good ball was played up to Larkin, who drove into the penalty area and fired in a shot that was well blocked by Purvis. The loose ball fell to Kyle Davis, who fired in a follow-up shot from just inside the penalty area that was again blocked by Purvis.

Midway through the second half and Larkin did well down the left, before picking out O'Neill on the edge of the penalty area, whose fierce volley flew over the crossbar. In the 70th minute, Thomas McAloon made his debut for RCA, replacing Michael Charlton. Two minutes later and Kyle Davis made a good run through central midfield before playing the ball out to Clayton Davis, whose low cross was stabbed narrowly wide by Larkin at the far post.

Into the final ten minutes - and with RCA pressing for an equaliser - Kyle Davis fired in a shot from a good position straight at Purvis. In the final minute, McAloon forced a corner after good play down the right, which was cleared. In stoppage time, RCA were awarded a free-kick 25 yards from goal after a foul on Hodgson, but the free-kick was comfortably cleared. With RCA still pressing, Shields were again able to counterattack and Taylor broke clear once more, but Tsapalos was able to make another good block with his feet.

A frustrating afternoon in a match where RCA created more than enough chances to take at least a point.

This afternoon's defeat means RCA drop to sixth in the table, with 25 points from 15 matches played. With nearly half the league matches played for most clubs, it looks like Consett and Dunston are going to take some stopping from finishing in first and second place, and a clutch of teams will be battling for third spot. But it's a funny old game!

Next up for RCA is a return to cup football when we travel to Crook Town for the Brooks Mileson Memorial League Cup, Second Round, match on Wednesday, 14 November. Kick-off is at 7:30pm.