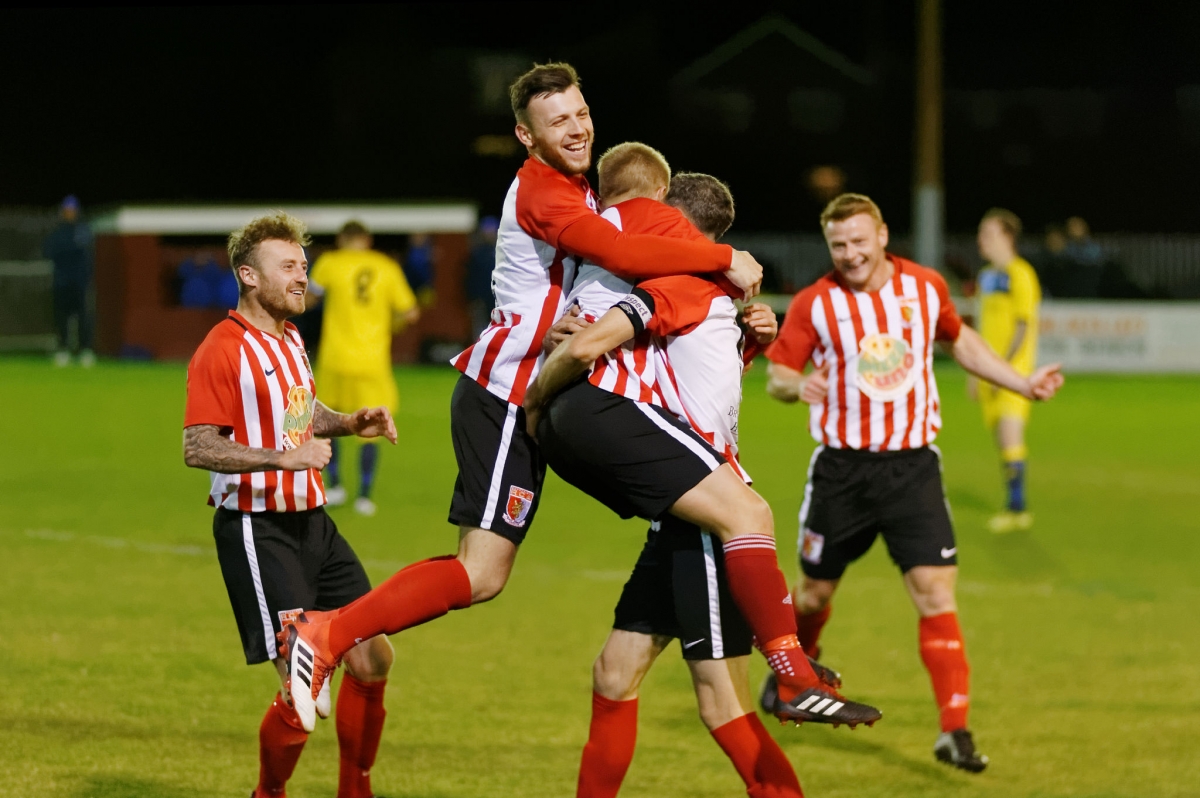 After a cagey opening few minutes, RCA opened the scoring with the first real attack of the match in the sixth minute - Elliott did well in midfield to win back possession before releasing Charlton down the slope through the inside left channel. Charlton drove to the edge of the Bay penalty area and his shot was well blocked by Bannon, but Moan was on hand to nod the loose ball home from just inside the penalty area and into the unguarded goal. Within four minutes Bay were level, as Foalle took advantage to some overplaying at the back from RCA and advanced into the penalty area and finished well past the advancing Tsapalos. In the 19th minute, RCA were awarded a free-kick on the halfway line which was delivered deep into the Bay penalty area by Davis, where Preston stabbed the ball narrowly wide.

Seven minutes later and the visitors had the lead as Carr made a good run down the left and his cross was headed behind for a corner by Preston. From the corner, Tsapalos could only beat the ball down into the ground and Anderson was first to react to smash the ball into the net from six yards. In the 31st minute, Bay came close to extending their lead - McFarlane played a terrific cross field ball in behind the RCA defence for Foalle, who raced into the penalty area and, after strong appeals for a penalty, the referee awarded a corner. From the corner, the ball was half-cleared to the edge of the penalty area, where Glen-Ravenhill fired a shot narrowly wide of the post. Six minutes later and another super ball was played out to the right where McFarlane fired in an ambitious half-volley which was comfortably held by Tsapalos. In stoppage time RCA grabbed an equaliser as a loose ball fell to Elliott on the right, and Elliott played the ball inside to O'Neill, who, from 22 yards, side footed a precise, low shot into the bottom corner.

Five minutes into the second half and RCA retook the lead - a long ball was headed clear by the Bay defence, and Elliott watched the ball down, before firing in an unstoppable volley from 25 yards which flew into the far corner. A brilliant strike! Three minutes later and RCA were awarded a free-kick right on the edge of the Bay penalty area after Moan was tripped driving towards goal. Elliott's free-kick was whipped up and over the wall and destined for the bottom corner but Bannon produced a terrific, diving save to parry the ball around the post.

On the hour mark, a Bay corner from Salmon was glanced just over the crossbar by Foalle as he rose well at the front post. In the 70th minute, RCA had a great chance to clinch the match as a ball was played out from the right and Davis side-footed wide from 12 yards. Two minutes later and RCA made a double substitution, with Mark Davison and Colin Larkin replacing Dominic Moan and John Jury, and Larkin slotting in at right back. Three minutes later and Bay were so close to an equaliser as McFarlane fired in a fierce shot across goal which produced a terrific save from Tsapalos, diving low to his right to parry. From the loose ball, Richardson fired in a follow-up shot, which had goal written all over it, but for a brilliant sliding block by Preston.

In the 75th minute, Bay were awarded a free-kick in a dangerous position which was fired over the wall and over the crossbar by Richardson. One minute later and Clayton Davis was replaced by James Armstrong. And a further minute on, the dangerous McFarlane made a good run down the right before playing the ball inside to Richardson, whose shot from the edge of the RCA penalty area bobbled wide of the post. The final action of the match saw Richardson sent off after a clash with Davison.

An excellent win for RCA tonight in a tight game, with the sides only separated by a magnificent volley from Dylan Elliott that was worthy of winning any football match.

RCA move back up to third in the table, with a very healthy 21 points from 12 matches played. And this is, arguably, without hitting the performance heights, as yet, of the brilliant 11-match unbeaten run at the end of last season! Good to see the goals being shared around the team too. Plus a very good crowd of 136 at Meadow Park tonight, despite Sunderland AFC playing a big match at home to Peterborough United, and Champions League football on the telly on a chilly night. All very encouraging stuff.

Next up for RCA is a trip to Heritage Park to take on Bishop Auckland this Saturday, 6 October, with a 3pm kick-off.