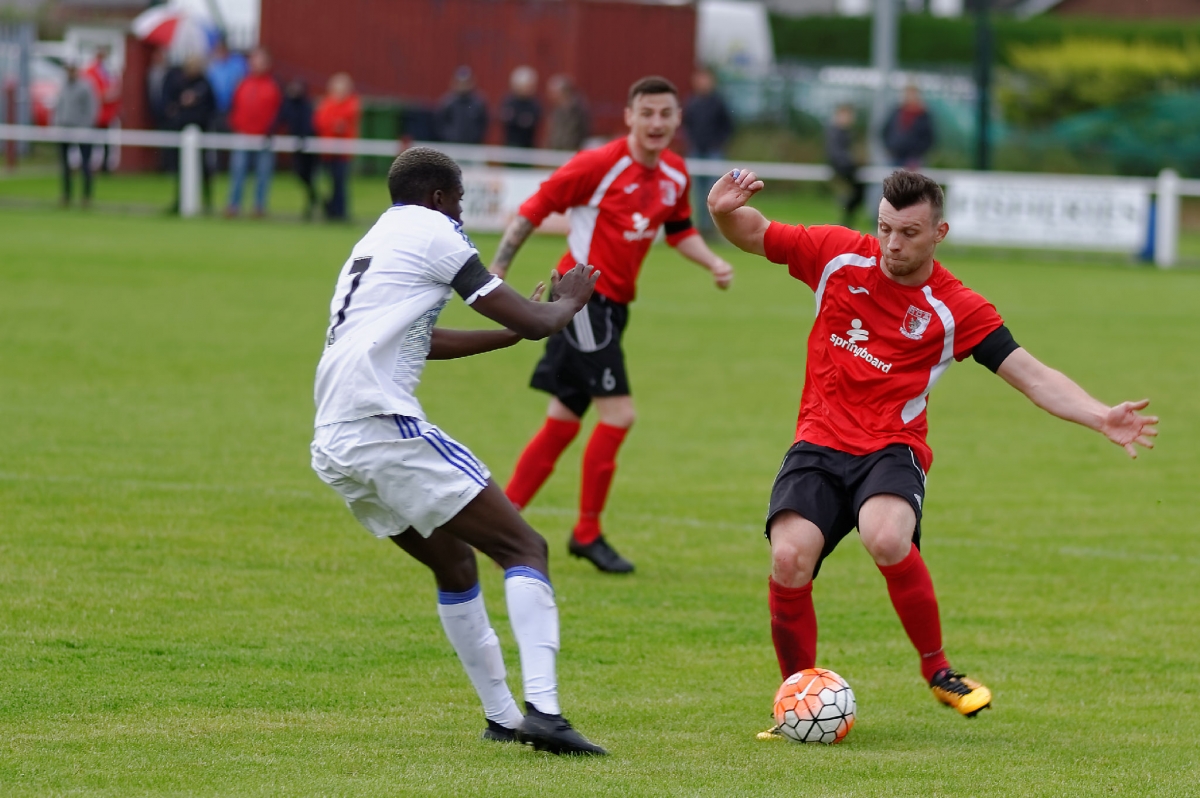 Ross McNab makes another timely interception during the first half of the match. Photograph: Simon Mears.

For Kevin Wilson's photos from the match please click here.

Sunderland RCA began their pre-season programme with a high-profile match with Sunderland AFC under 23s.

RCA included recent signing Dylan Elliott in the starting line-up which, otherwise, had a familiar look to last season.

The match got under way with RCA kicking up the slope, but it was the visitors who made the better start, retaining possession and passing the ball around confidently. In the seventh minute, SAFC had the first meaningful chance of the match when Diamond made a run down the left and was challenged by Swansbury and the ball went out for a corner. From the corner, the ball was headed wide by Kimpioka at the edge of the penalty area. Six minutes later and RCA were on the attack - after some neat play down the left between McNab and Cassidy, the ball was crossed into the penalty area but Callen got underneath the shot and fired over.

In the 18th minute, SAFC came close to taking the lead after a good move down the left, the ball was played into Diamond, whose shot was deflected off McNab attempting to block and the ball crashed off the top of the post and rebounded to safety. Three minutes later and a good through ball put Larkin in on goal but he was fouled for what would have been at least a booking were it not a friendly. McNab drove the subsequent free-kick from 25 yards but it was comfortably held by Woud.

On the half hour mark Kimpioka made a driving run down the left and was fouled by Hodgson. From the free-kick the ball was headed behind by Swansbury for a corner which was, in turn, headed over the crossbar by J Robson. Two minutes later and SAFC had the lead. Again the dangerous Kimpioka was involved, crossing from the left, and the ball was headed home unchallenged by Wright from six yards.

RCA got the second half off to an explosive start and within two minutes were level - a low ball from the right found Larkin, and last season’s joint top scorer guided the ball into the far corner from the apex of the six-yard area. Two minutes later and RCA had the lead with an early contender for RCA's goal of the season award. Recent signing Nathan O’Neill had only been on the pitch for four minutes after coming on at half-time when he smashed a brilliant right foot, curling effort into the top corner from all of 25 yards.

In the 63rd minute, SAFC came close to an equaliser as a ball in from the right was side-footed into the side netting by Krusnell - although Bussey looked to have it covered. Eight minutes later and Callen fired in a shot on the run that was comfortably saved by Woud. Three minutes later a shot by substitute Poame from 25 yards was comfortable for RCA's substitute goalkeeper Francesco Peccolo. The final minutes of the match failed to produce any noteworthy opportunities for either side.

A highly competitive and entertaining match settled by a cracking strike from O’Neill. Pre-season friendlies are, of course, about players regaining match fitness and gelling the team together. But positive results breed confidence and this was a terrific win to get RCA's pre-season under way.

Many thanks to all involved at Sunderland AFC for making tonight’s match possible.

RCA's next friendly match is at newly-promoted Jarrow on Wednesday evening.