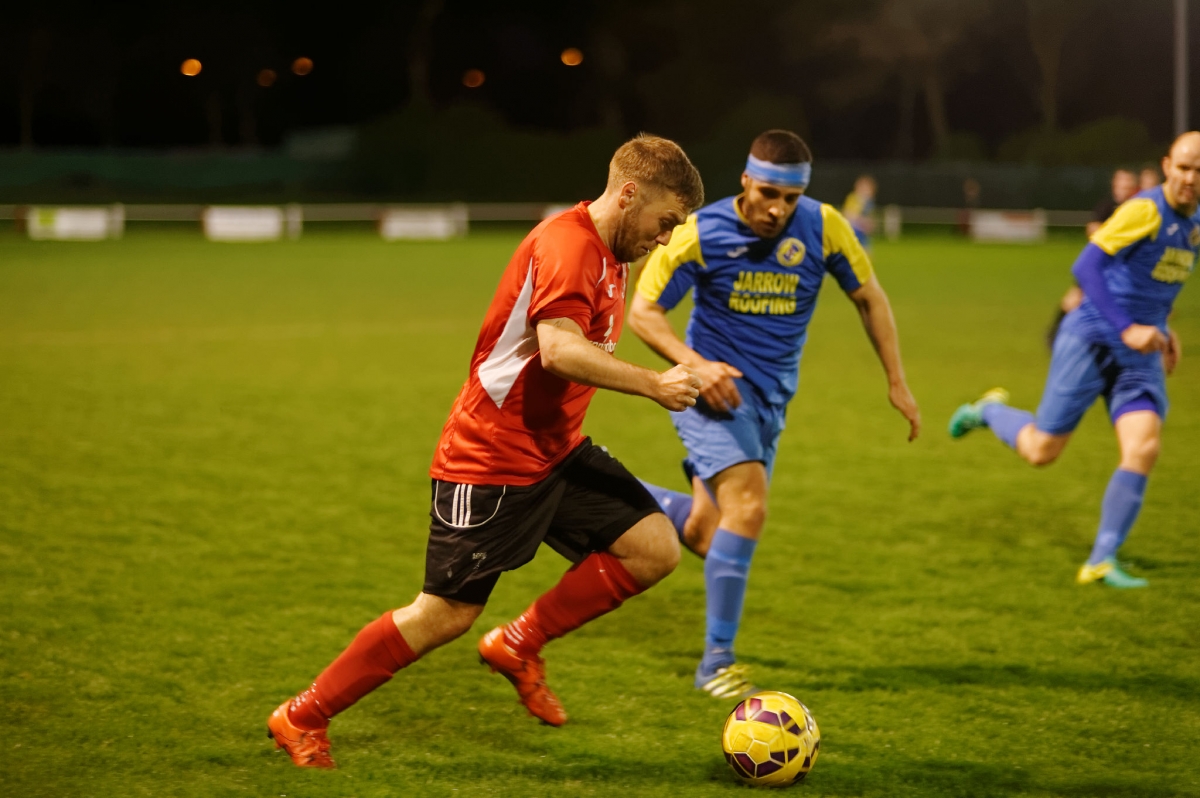 Michael Charlton keeps up the pressure during the second half of the match. Photograph: Simon Mears.

RCA are currently on a five-match lose-win sequence after narrowly losing to Marske United on Saturday after an excellent second half showing.

Jarrow - currently sitting in 15th place in the table with 45 points - played their final home match of the season on Saturday and earned an excellent 1-1 draw with Shildon.

Back in September, the reverse fixture was settled by a single Paul Chow goal late in the match, despite RCA playing the majority of the second half with nine men - after two straight red cards for violent conduct.

RCA named the same side that lost to Marske United on Saturday.

RCA got the match got under way, kicking up the slope, on a gusty night and won a free-kick in the opening minute after Charlton was clattered and Burton was booked for the challenge. The free-kick was cleared by Brass in the Jarrow goal. Four minutes later and Cassidy made a driving run down the left before cutting in and firing a shot into the side-netting. In the 11th minute, Knight made a good run down the Jarrow right and crossed to Chow, who controlled the ball well but the flag was raised for offside as he shaped to shoot. Three minutes later and Charlton made a good run down the RCA right and crossed to Callen whose shot was fired into the ground and bounced over the crossbar. In the 17th minute Jarrow took the lead - Knight made a run towards the edge of the RCA penalty area before being fouled by Swansbury. Knight picked himself up and - just as Julio Arca did for South Shields - bent a delightful free-kick up and over the wall and into the bottom corner.

Midway through the first half and Charlton made a good run down the RCA right but his cross was blocked for a corner - from Larkin’s corner, Callen rose and headed over the crossbar. One minute later and Chow made a run down the Jarrow right but his low, teasing cross went straight through for a goal-kick. In the 26th minute RCA were again on the attack - after good work down the right, Larkin played the ball back to Noble whose cross was headed over the crossbar by Callen. One minute later and Charlton made a good run down the right, forcing a corner after his attempted cross was blocked - Larkin’s corner was fired wide of the post by Swansbury.

On the half hour mark, a long goal-kick downfield by Brass caught the wind and was cleared for a corner which, in turn, was cleared near the goalline by Preston. RCA then went straight back on the attack and Armstrong’s cross from the left was headed goal wards by Butler but well saved by Brass. One minute later and RCA had another excellent chance after a run by Larkin down the right forced another corner - Larkin’s corner was met with a terrific header from Swansbury, which had goal written all over it, until Brass clawed the ball away from the bottom corner with a cracking save. The pressure from RCA kept on coming, and with six minutes to half-time a Larkin free-kick was flicked on by Callen to Butler whose header was palmed away by Brass for a corner - from the corner McGuinness had a header saved again by Brass at the far post. In the final minutes of the half, Callen was fouled and, from Larkin’s free-kick, Brass punched the ball clear to give the away side the lead at the break.

After dominating the first half, RCA came out in the second - now kicking down the slope and with the wind - and continued to take the game to the opposition. In the 50th minute, Cassidy made a driving run down the left and crossed along the ground to Callen, who took a touch and fired in a shot from the penalty spot that hit the outside of the post and rebounded behind for a goal-kick. Two minutes later and Larkin crossed low to Swansbury whose shot was saved by Brass. The pressure on the Roofing goal was now incessant and the chances kept coming - a Charlton cross was caught superbly by Brass at full stretch, and then a terrific cross from Armstrong from the RCA left just eluded the outstretched boot of Butler inside the six-yard area.

With 20 minutes remaining, RCA came so close to an equaliser when Charlton made a good run and cross which was cleared for a corner - from the corner there was an almighty scramble in the six-yard area before substitute Hubbard produced a super reflex save from Brass and then a follow-up effort hit the outside of the post and away for a goal-kick. One minute later and Larkin picked up the ball in midfield before driving ten yards forward and firing in a long-range shot which went narrowly wide of the post. With RCA committing so much to attacking, there was always a chance of being hit on the break, and in the 73rd minute an RCA attack broke down and Vipond made a driving run up the Jarrow left before playing in substitute MacKay, who controlled the ball before going past Carmichael and slotting the ball into the unguarded net. A classic counterattack and a hammer blow to RCA.

As the match entered the final fifteen minutes, RCA continued to throw everything at Jarrow and a Noble crossfield ball was headed just wide of the post by Callen from the edge of the penalty area. One minute later and Armstrong crossed from the left and Hubbard sent a spectacular overhead kick narrowly wide. RCA then had a succession of corners which were all cleared. In the 82nd minute, RCA finally got the ball past Brass in the Roofing goal - a long ball forward was held-up well by Preston, who found Noble on the RCA right. Noble’s cross was headed off the face of the crossbar by Callen, but the RCA striker was first to react and headed his own effort back into the net for his 19th goal of the season. With RCA now back in the match, a grandstand finish was on the cards until two minutes later when, for the second time in the half, Jarrow gained possession and broke through substitute Bailey, who squared the ball to MacKay who was left with an easy finish to clinch the points for Jarrow. And with two minutes remaining, the scoreline could have got even worse for RCA as another break, this time from Chow, left substitute Bailey in on goal but his shot was fired high and wide. In the last action of the match, Callen won a strong challenge in midfield before bulldozing his way through three Jarrow defenders but his shot bobbled wide of the post.

A match dominated by RCA almost from start to finish. And, just as on Saturday at Marske at the hands of Robert Dean, Jarrow had an inspired goalkeeping performance to thank from Lewis Brass, who produced save after save, allowing the Jarrow forwards to break twice in the second half and settle the match.

RCA now have an 11-day break with no match until a week on Saturday, 22 April, when we travel to Consett for our final away fixture of the season.