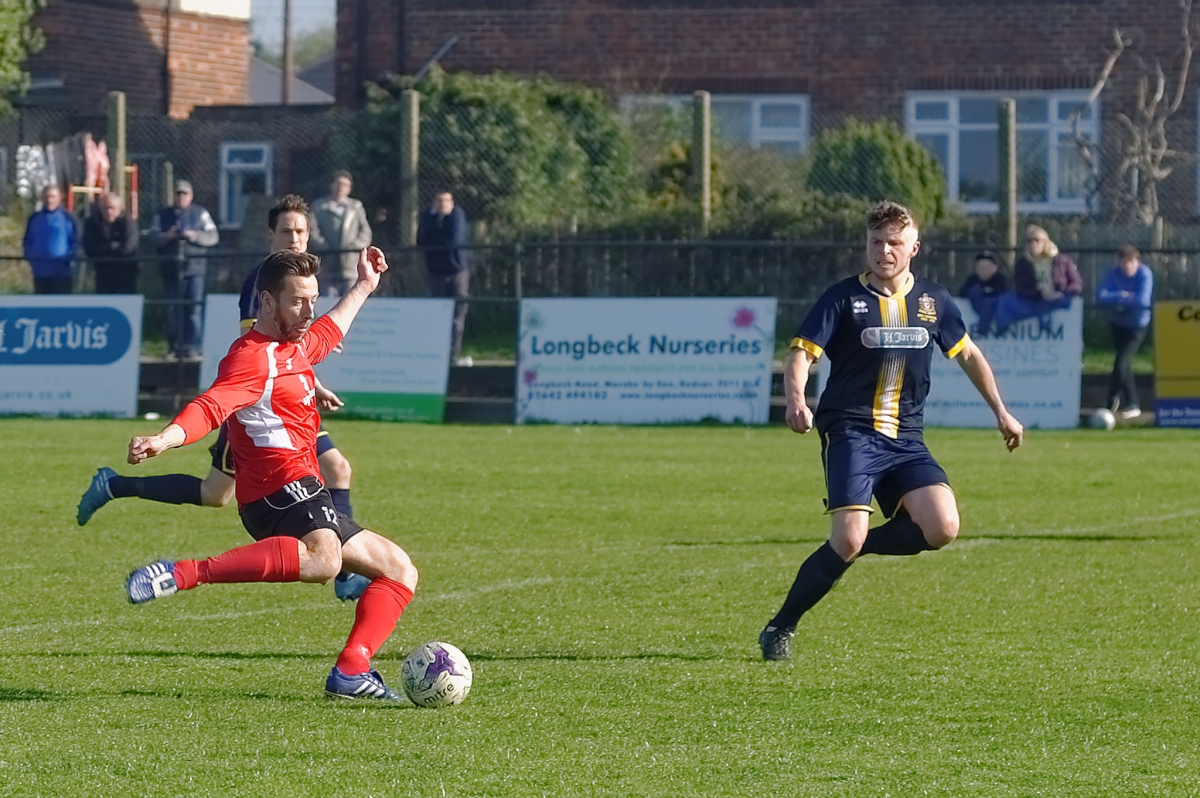 RCA substitute Craig Hubbard fires in a shot during the second half of the match. Photograph: Simon Mears.

Sunderland RCA were back on the road today with a trip to Marske United. This was the third occasion that the sides had met this season, with Marske winning the previous two encounters at Meadow Park by the same scoreline, 4-2. Going into the match, Marske have a good, but by no means invincible, record at home - winning ten and losing seven of their 19 home games played.

RCA, meanwhile, enjoyed a remarkable club-record win, 10-1, at Washington last Saturday and would be looking to keep the momentum going as the season draws to a close.

RCA made one change to the side that thrashed Washington last Saturday, with Jonathan Carmichael replacing Neal Bussey in goal.

The match kicked off on a glorious afternoon and the home side got off to an equally glorious start, taking the lead in the second minute - Kelly and Preston challenged for a ball down the Marske left and Kelly gained control of the ball before cutting into the penalty area and squaring to Aaron Ramsbottom, who made no mistake with a side-footed shot from 12 yards. Two minutes later and another ball in from the left fell to Aaron Ramsbottom, whose scuffed shot from the edge of the penalty area was comfortably saved by Carmichael. In the 10th minute the home side doubled their lead with a terrific individual goal - Kelly made a run down the left, cutting in and driving into the penalty area before firing the ball into the bottom corner, beating Carmichael at the near post. Two-nil to Marske with RCA, metaphorically, still in the dressing room. Three minutes later and RCA had their first effort of note as Callen made a driving run through midfield before having his shirt pulled and winning a free-kick. Armstrong’s kick went straight through for a goal-kick.

In the 26th minute a ball from the right was played into the feet of Aaron Ramsbottom, whose attempted shot was blocked and cleared by Preston. One minute later and Marske had a third - Butterworth, on the halfway line, split the RCA defence with a perfectly-judged through ball and Earl, first-time and without breaking stride, lashed a beauty up and over Carmichael and into the roof of the net from 20 yards. With the very real fear that a reversal of last week’s cricket score could be on the cards, two minutes later RCA won a penalty - Callen made a run into the penalty area and, as a Marske defender made a challenge, the referee pointed to the spot, indicating a handball. Larkin stepped up with a well-taken spot-kick which produced an excellent save from Dean, diving to his right.

With ten minutes to half-time, Callen made a good run down the RCA right and forced a corner. From the corner McGuinness won a header at the far post which was cleared with a big thump downfield, resulting in a sprint for the ball between Earl and Preston and the home side winning a corner after the cross was blocked. The corner was cleared first by McGuinness and then by the head of Preston. In the 42nd minute, a crossfield ball from midfield found Earl - on the apex of the RCA penalty area - who attempted another spectacular effort on the run, but this time the ball went high and wide. With seconds remaining in the first half, RCA grabbed a lifeline as Larkin played a lovely one-two with Callen down the RCA left, before advancing into the penalty area and squaring the ball to Butler who struck from inside the six-yard area.

It was fired-up RCA that took to the field for the second half, dominating the early exchanges. In the 55th minute, RCA had their first attempt of the half when the industrious Charlton harried the Marske defence and won back possession before playing the ball to Larkin whose shot from the edge of the penalty area was saved by Dean, diving to his left. One minute later and RCA were so close to scoring as Butler hit a screaming shot from 25 yards that flew high into the air off the crossbar. The ball dropped to Charlton whose right-footed shot in the six-yard area produced a terrific one-handed reflex save from Dean. Nine minutes later and RCA won a free-kick for a foul on Preston - from the kick, Butler controlled the ball well before playing in Callen whose shot was scuffed wide from inside the penalty area.

Midway through the second half and a ball up to Butler was flicked on to Armstrong whose shot was beaten behind by Dean from an acute angle for a corner. From the corner, McGuinness won the ball at the far post but Butterworth cleared. Three minutes later and RCA were back in the match - Cassidy was tripped after making a run down the RCA left. From the free-kick the ball was lofted to Callen at the far edge of the penalty area, who played the ball back into the danger area and Swansbury finished well from six-yards to give RCA a chance.

In the 77th a Marske corner was headed wide by Wheatley. Seven minutes later, an RCA throw-in on the right was controlled by Callen, who played in Noble whose cross was cleared for a corner which was headed wide by McGuinness. One minute later and Charlton won the ball in midfield before releasing substitute Hubbard whose powerful goalbound shot was superbly saved again by Dean. As the match went into stoppage time, RCA had two further chances to equalise as first, Cassidy made a run down the left before playing in Callen who fired over the bar from a tight angle - and then a Charlton cross on the RCA right was flicked on by Callen but Swansbury, agonisingly, couldn’t quite get a full boot onto the ball and it drifted out for a goal-kick.

RCA at least ‘won’ the second half with a vastly-improved performance, creating numerous opportunities to salvage a point - unfortunately, the damage was done in the first third of the match as Marske took the game to RCA and finished clinically.

Next up for RCA is Jarrow Roofing at home this coming Tuesday, 11 April. Get along to Meadow Park and support the lads as we look to beat last season’s points total in our penultimate home game of the season.