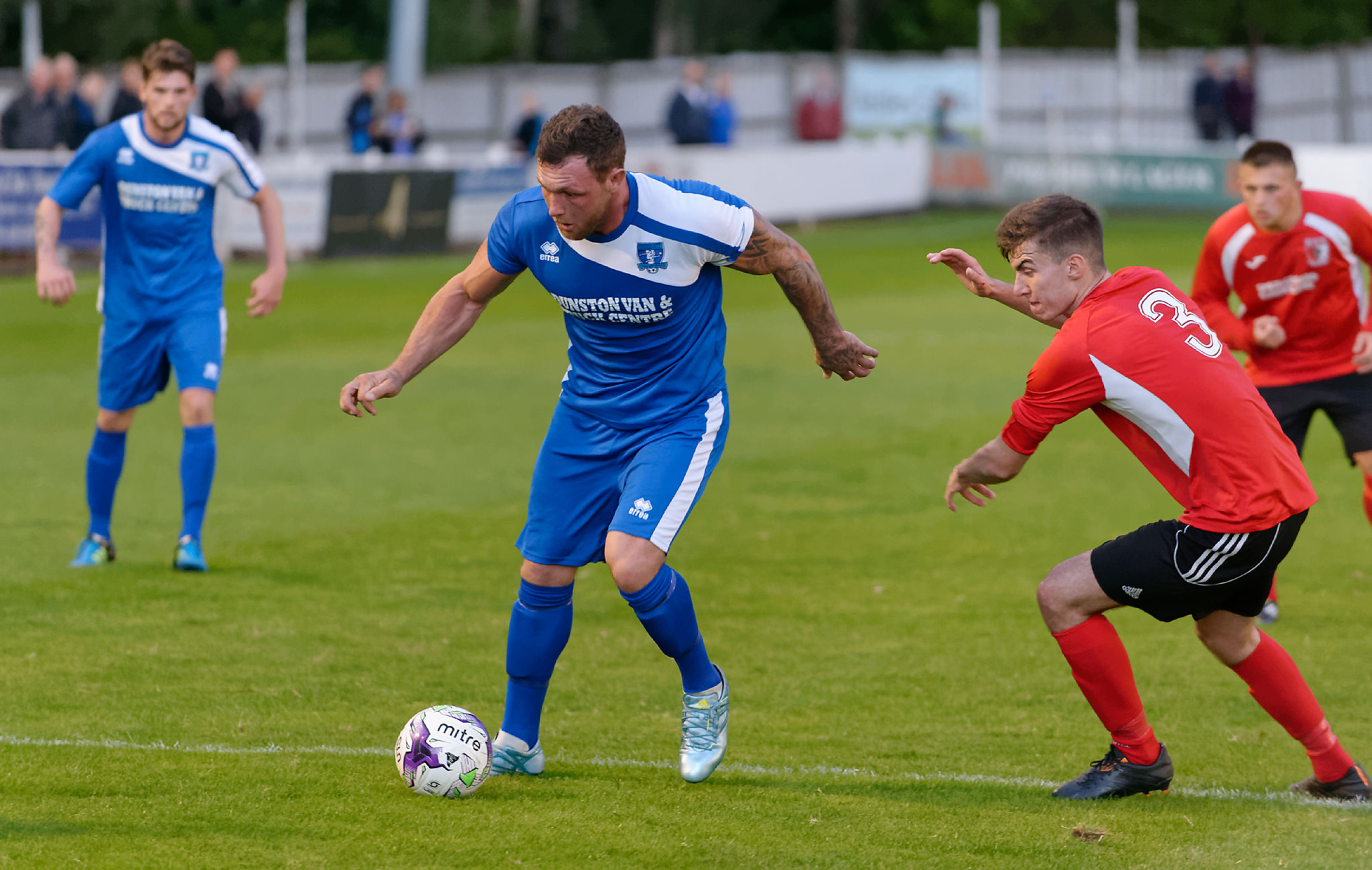 Dunston attack in the second half of the match.

The injury problems continued for RCA ahead of this match, with Drysdale still out with an ankle injury, Larkin failed a fitness test and was replaced by Hope and although Harkess was declared fit Morris retained the number 1 Jersey.

It's a difficult enough task to select a starting eleven with a fully fit squad, but the management team at RCA at the moment are making selections based on who turns up fit on the day.

Nevertheless the team selection looked good enough to give Dunston a game and in the opening exchanges it was RCA who created the better chances a pass from Proctor found Davis on the right in opening minute of the game and his cross into the box was cut out by Burrell.

A minute later and the influential Proctor played a quick one-two with Callen before sliding the ball into the path of Hughes, he deftly clipped the ball past the advancing Connell only to se the ball slide agonisingly wide of the upright.

Dunston where starting to get into the game, using a long ball tactic which was causing some problems for RCA as the pacy Richardson seemed able to collect the ball unchallenged and it was only some good late challenges that stopped him from scoring with his first effort which was blocked by Hatch.

The home team took the lead in the 12th minute when a ball out of defence was picked up by Richardson on the half way line, Hatch, who was marking him pulled up sharply, leaving the Dunston hit man free to run twenty yards before firing in an unstoppable shot past the dispairing dive of Morris.

Charlton replaced Hatch with Noble switching from midfield into the centre of defence.

RCA looked to respond to this early setback and produced some good flowing football going forward.

On the quarter of an hour mark Charlton and Davis combined on the right before sending the ball to Proctor who fired wide from 25 yards out.

Dunston were playing quickly on the break and in Richardson and Morien they had the perfect target men. In the 22nd minute Francis played a delightful ball to Smith and his ball into the box was met at the far post Briggs who headed goalward but Morris pushed the ball round the post.

In the 28th minute RCA had a strong shout for a penalty when a cross into the box from Charlton appered to be handled by a Dunston defender, in the scramble that followed Hughes looked to be fouled and had to leave the pitch.

Dunston took full advantage while RCA were down to 10 men, a break from midfield by Smith wasn't picked up by the RCA defence and he burst into space before sending in a terrific thunderbolt of a shot into the roof of the net.

RCA responded with a good spell of pressure and some good football without really creating any chances. However they were restricting Dunston to mainly playing in midfield and they were finding it difficult to create and meaningful chances.

However, in the 45th minute another goal for Dunston kiiled the game off. This time a through ball from Francis was picked up by Morien and from 20 yeards out he lobbed the ball over Morris and into the net.

Dunston started the second half as they finished the first, some quick interplay between Francis and Morien set up Smith and his low driven shot went inches wide of the post.

RCA came straight back at them, a ball from Proctor found Horsley on the edge of the box, he squared it to hope who crossed it in to Charlton but the RCA winger scuffed his shot and it was easily saved by Connell.

With the game a lot more open in the second half both teams were creating chances. A shot from Morien was blocked by Brown, the resulting corner was cleared up field where Davis crossed into the box and Horsley's shot was blocked by Wilkinson. a poor clearance fell to Hope who slipped ythe ball forward for Horsley again but the RCA Striker once again found the legs of Wilkinson in the way of his shot.

In the 80th minute, the game came to life again, after a period of little activity by either team, when a cross from Francis evaded everyone in the RCA box and Bulford at the far post missed the chance to make it 4 - 0.

Straight away RCA created a chance at the other end when Proctor found Callen in space on the right and his first time cross was met by Horsley but his low drive was well saved by Connell.

Francis, who had been dangerous all evening almost produced a superb goal sending in a wicked cross which went narrowly over the bar with Morris stranded.

Dunston looked to be finishing the game strongly and a shot from Richardson went narrowly wide, howevr the striker did not have long to wait to add to his tally for the night when he took advantage of a mix up in the RCA defence to fire in his second goal of the night at the second attempt, Morris parrying the first effort.

This was a difficult game for RCA on the back of playing Consett on Saturday, the injuries to the team before and during this game were a massive blow to the team.

There are still some positives to take from this game, we played some good attractive football, made Dunston work really hard in the swe econd half and we continued to create chances even when we were 3 - 0 down.

I personally don't think that Dunston were four goals better than us, but what they proved is that if you have a goalscorer in the team keep feeding him the ball and he will eventually score.