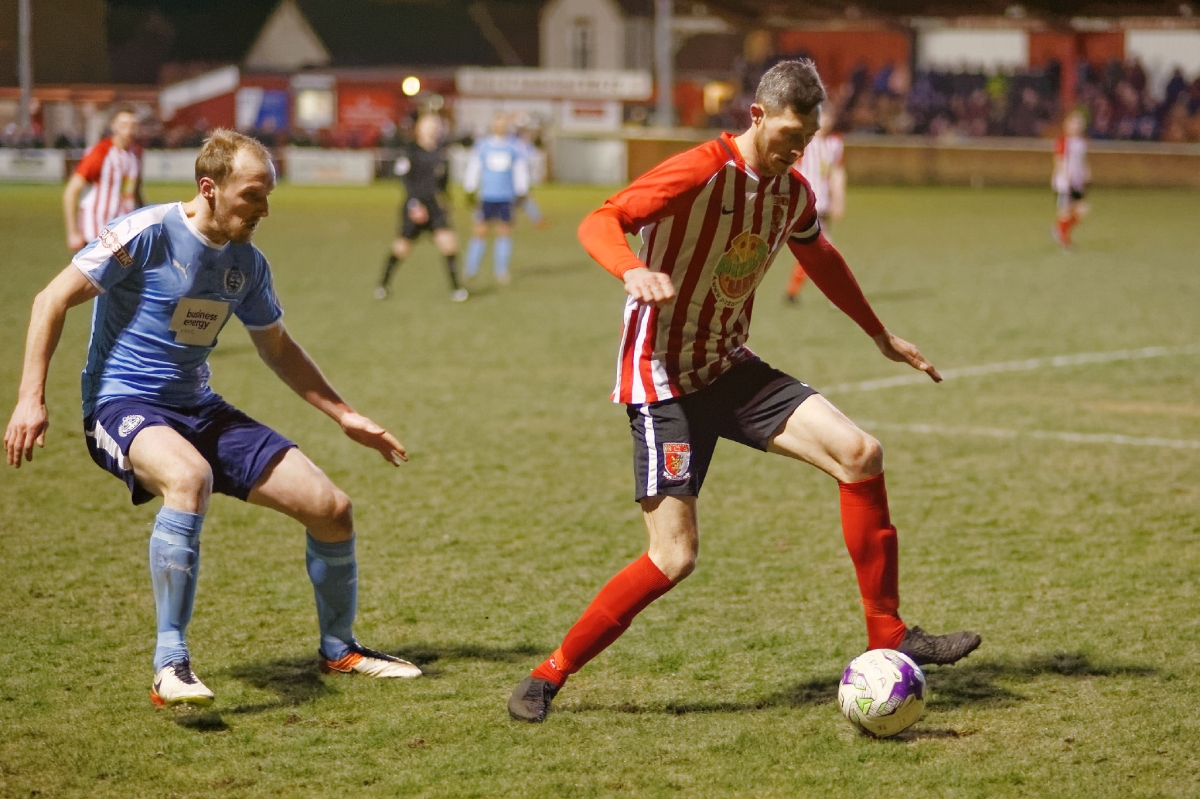 Sunderland RCA FC crashed out of the Durham Challenge Cup as South Shields march into the semi-finals. A 6.30 inspection of the pitch by match referee Mr Marc Edwards verified that the match was on.

The match kicked off on a bitterly cold night with RCA kicking up the slope.

South Shields took the lead in the 4th minute when a Pocklington clearance was picked up in the centre circle by ex-RCA man Briggs and he did not hesitate to send a looping shot over the back peddling Pocklington and into the net despite the RCA keeper getting a hand to it.

RCA responded, forcing a number of corners, the last of which was an in-swinger, which had the South Shields defence scrambling to clear with Biwer eventually clearing off the line.

South Shields were awarded free kick on the edge of the box which was hammered into the wall by Briggs and RCA countered and were awarded a free kick of their own. Hodgson played the ball out to the right where K Davis slipped past his marker before sending in a wicked low cross which skidded to back post where Swansbury was on hand to smash the ball into the roof of the net.

The visitors looked to have taken the lead in 26th minute when Ursene Mouonda played a delightful ball through to Cogdon who took the ball round Pocklington but his shot was cleared off the line by Preston and the danger was cleared.

Shields were awarded a penalty in the 39th minute when Cogden was adjudged to be fouled by Preston inside the area, Briggs stepped up and hit a poor penalty which seemed to hit Pocklington before going into the net on another night it would have probably been saved but this was not going to be the  RCA goalkeeper's night.

In the dying minutes of the half RCA looked to get back on terms McAloon, in space sent a shot over the bar and with seconds remaining of the half K Davis made another right wing run before crossing into the box where Howard was able to head the ball into the path of O’Neill who volleyed the ball home.

A tactical change at half time by South Shields saw them move Cogdon onto the left to try and stop the forward momentum of both Howard and K Davis.

The second half, unlike the first didn’t come to life until 10 minutes in when RCA won their first corner of the half, the ball was headed clear by Shaw but fell to Page on the edge of the area but he sent his low drive just wide of the target.

In what was to become the defining moment of the game Shield’s keeper Lister pulled off a fantastic double save, the first came when Larkin burst into the box before shooting towards the bottom corner, Lister diving to his right made a great save but the ball sprang loose to Davision who turned quickly fired in a shot which, despite lying on the floor Lister was able to turn away for a corner.

This seemed to lift South Shields and along with the introduction of Morse and Cowburn the visitors took the game by the scruff of the neck.

Shields regained the lead in the 73rd minute after an RCA attack broke down the visitors counter attacked to great effect with Cowburn sending a great crossfield pass into the path of Guy inside the RCA area and his shot slipped through the hands of Pocklington and into the net.

RCA almost equalized again two minutes later when Howard sent a low cross into the six yard box, the ball slipped past the advancing K Davis hit Shaw and rebounded into the arms of Lister, a real let off for the visitors.

Within a minute Shields were 4 – 2 up when some controlled football between Shaw, Mouonda and Briggs saw the ball played forward to Guy his pass inside was finished by Lowe who slotted past Pocklington.

With seconds remaining Shields put the nail in the coffin when Briggs completed his hat-trick when he ran onto a through ball and he finished with some aplomb.

Next up for RCA are Whitley Bay, away, on Saturday.