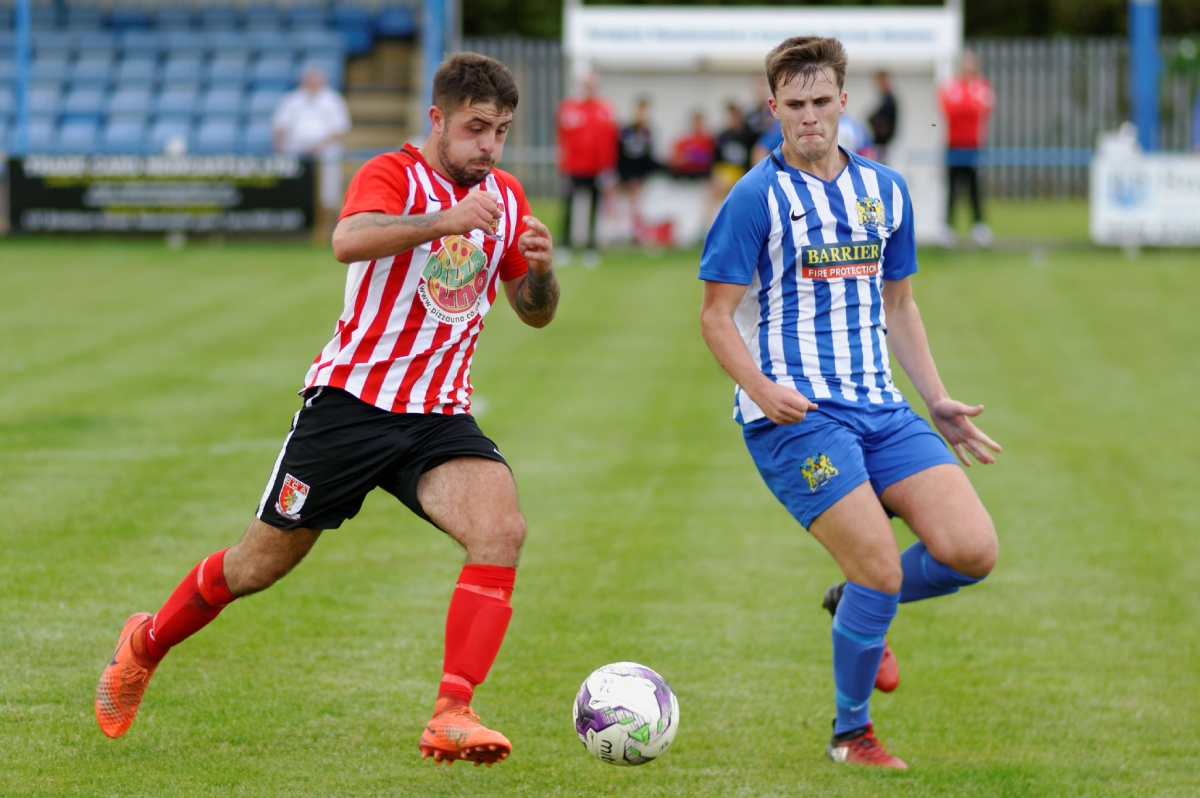 It was the home side who had the first attempt on goal as early as the second minute, when Knight fired in a free-kick from all of 30 yards which was on target but comfortable for Pocklington. Two minutes later and RCA had their first attack as Charlton made a good run down the right before crossing into the Benfield penalty area where Page fired in a shot which was beaten away by Grainger, and McNab, following up, also had a shot well saved by the Benfield ‘keeper. In the eighth minute, Benfield had a great chance to open the scoring - Robinson made a driving run down the right and to the edge of the RCA penalty area before playing in Knight, who had time and space but his shot was blocked by the feet of Pocklington and the loose ball was cleared. Three minutes later and RCA had the lead - Charlton again did well down the right, running from the halfway line to the edge of the penalty area, before crossing low to Moan. Moan then played in Ramshaw, whose shot took a wicked deflection leaving Grainger helpless. RCA's lead, however, lasted for barely a minute as the ball was played up to Scott, who found space in midfield and advanced forward before curling a super, low shot right into the bottom corner. In the 16th minute, RCA had an excellent opportunity to retake the lead after Page split the Benfield defence for Moan, who had a clear run on goal but lifted his attempted lob high and wide. In the 38th minute, RCA were forced into a first substitution, with Michael Charlton limping off with an ankle injury and being replaced by Sam Lilley. In the final minute of the first half, Knight fired a shot wide from the edge of the RCA penalty area.

Three minutes into the second half and RCA were on the attack as Jury played in a deep cross to the far post which was headed down by Davison and Page went to ground under a challenge, but the referee ignored appeals for a penalty kick. In the 53rd minute, Page made a good run through central midfield before playing the ball out to Ramshaw, whose cross was well held by Grainger under the crossbar under pressure from two RCA players. One minute later and RCA were awarded a free-kick midway inside the Benfield half after a foul on Page. McNab delivered a good ball to the far post which was headed back across goal by Davison to Moan, but his header was straight at Grainger. Three minutes later, though, and Moan was on target, finishing a good move from RCA with a low shot, which Davis smashed into the net to make sure, but confirmed it was indeed Moan’s goal. Benfield hadn't really offered much of a threat in the second half, but in the 65th minute had a good chance to equalise when a cross from the right was headed wide by substitute Brayson. Ten minutes later and RCA extended the lead - Page, in the centre circle, played the ball up to Moan, who advanced forward, and, as the Benfield defence backed away, fired in a screamer from 25 yards which flew into the net. In the 82nd minute, Benfield were awarded a free-kick midway inside the RCA half after a foul on Martin by Ramshaw. Substitute Laidler’s free-kick was headed wide by Turnbull. In stoppage time RCA made a second substitute, with Sam Robinson replacing Clayton Davis and RCA saw out the remaining minutes without incident.

Another excellent win this afternoon in a tight match, but in which RCA took their chances in the second half.

A pity there was no Northern League team of the week poll this week - after away wins at two top teams, West Auckland Town and Newcastle Benfield, RCA would surely have been contenders.

Next up for RCA is the visit of high-flying Hebburn Town to Meadow Park on Saturday, 22 September, with a 3pm kick-off.