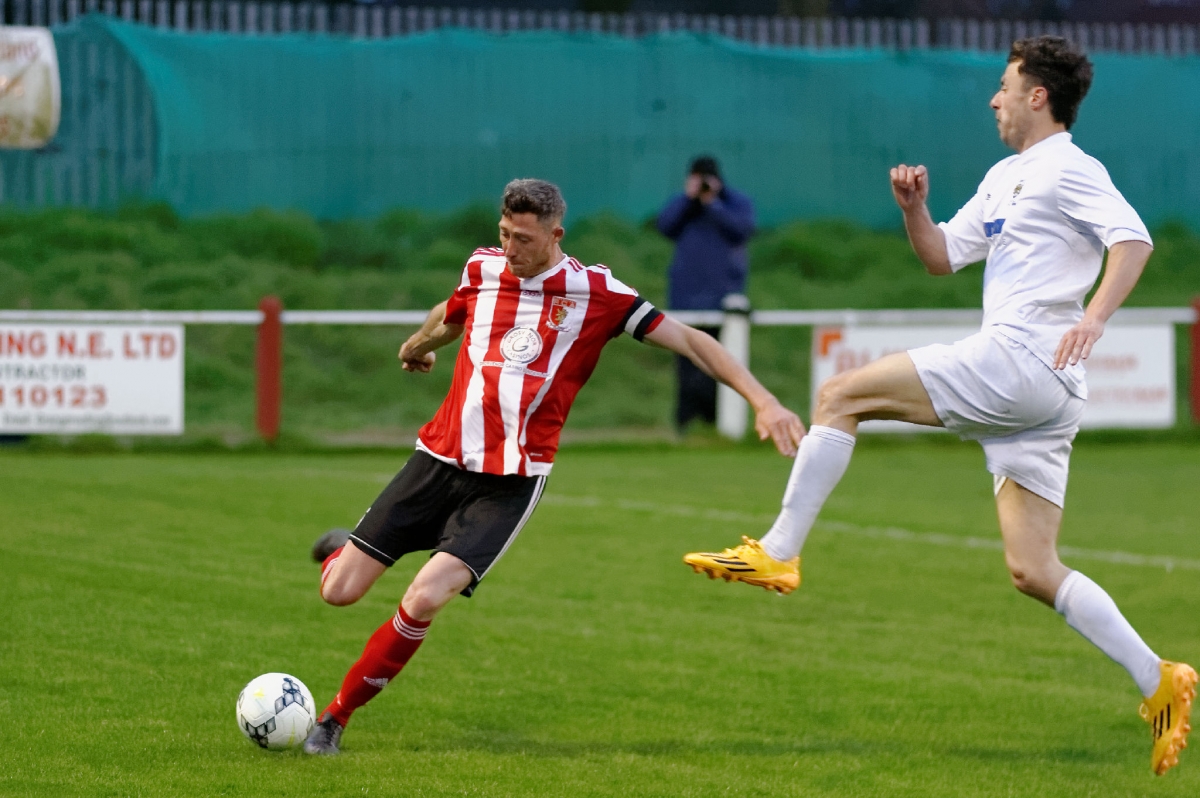 RCA man of the match Greg Swansbury clears the ball during the second half.

As the season draws to a close, Sunderland RCA began a busy spell of six matches in 11 days tonight, with Consett the visitors to Meadow Park.

RCA made two changes to the side that thrashed Bishop Auckland last Wednesday - Scott Pocklington returned in goal in place of Keith Finch, and Reece McEwan made his full debut for RCA, replacing Michael Charlton.

Apologies for any mistaken identity of the Consett players - silver numbers on white shirts are tricky to read! The match got off to a cagey start, with RCA kicking up the slope and into a strong wind. In the fifth minute, RCA were awarded a free-kick on the halfway line which was delivered by Noble to the edge of the Consett penalty area, where Page headed the ball down to O'Neill, who, back to goal, went to ground under challenge, but the referee ignored appeals for a penalty. It took until the 13th minute for the first attempt on goal - Consett won a corner on the right that was whipped into the RCA six-yard area, the ball bobbled around and Mackay turned neatly but fired his shot comfortably wide of the post. In the 24th minute, Reece Noble limped off and was replaced by Jonathan Davis, who slotted in at right back. Two minutes later, Male picked up a ball from the right and fired a shot from all of 30 yards that was again wide. And a further two minutes on and Callen and O'Neill combined well through midfield before Callen crossed from the left and Larkin headed wide from around 12 yards.

In the 32nd minute, a ball was played in from the left to Mackay inside the RCA penalty area. Mackay twisted and turned, looking for a sight of goal, before playing the ball back to Dowson, who shot wide from the edge of the penalty area. Two minutes later and RCA were unlucky not to take the lead - Page surged through central midfield before playing the ball up to Larkin on the edge of the Consett penalty area, but Larkin's shot across Hayes struck the base of the post. In the 36th minute, Consett had the ball in the net - Smith fired in a shot that was parried by Pocklington and Sweet knocked the loose ball in to the net, but the flag was up for offside. Five minutes later and a cross from the left from Male hit the top of the RCA crossbar and bounced behind for a goal-kick.

The second half began just as the first half had, with both sides cancelling each other out. In the 55th minute, Reece McEwan was replaced by Dylan Elliott. One minute later and RCA won a corner that was flicked on by Callen and Hayes turned the ball behind for a corner, under pressure from Hodgson. From Larkin's subsequent corner, Hayes punched clear. In the 70th minute, Consett were awarded a free-kick on the halfway line after a foul by Elliott which was cleared. RCA immediately broke and Elliott fired in a fierce, low shot that Hayes got a strong hand to and the loose ball was cleared, with O'Neill closing in.

Five minutes later and RCA took the lead. A long ball from Consett was intercepted by Swansbury, who played the ball upto Page. Page then found Larkin on the edge of the Consett penalty area, and Larkin turned superbly inside his marker before firing in a precise shot in to the bottom corner - a terrific finish for Larks’ 20th goal of the season. It looked like RCA were going to make it six wins in a row, until Consett were awarded a stoppage time free-kick on the halfway line. The ball was played in to the RCA penalty area and substitute Craggs flicked towards goal and Pocklington turned the ball around the post for a corner kick. Sweet delivered the ball into the RCA six-yard area and Pocklington looked get a hand to the ball but it bobbled agonisingly into the net.

By no means a classic, with clear-cut chances at an absolute premium for both sides, however, we have been spoiled lately by some fabulous football! It's always a sickener to concede deep into stoppage time, but a draw was a fair result. RCA were less than a minute away from making it six wins in a row.

RCA remain in fifth position and are now level on points with North Shields in fourth, but with two games in hand. Shildon drop to sixth but have games in hand to retake fourth spot. It looks like being an exciting end to the season, with teams jostling for their final positions.

Next up for RCA is a trip to league leaders Morpeth Town on Thursday, 26 April, with a 7:30pm kick-off.