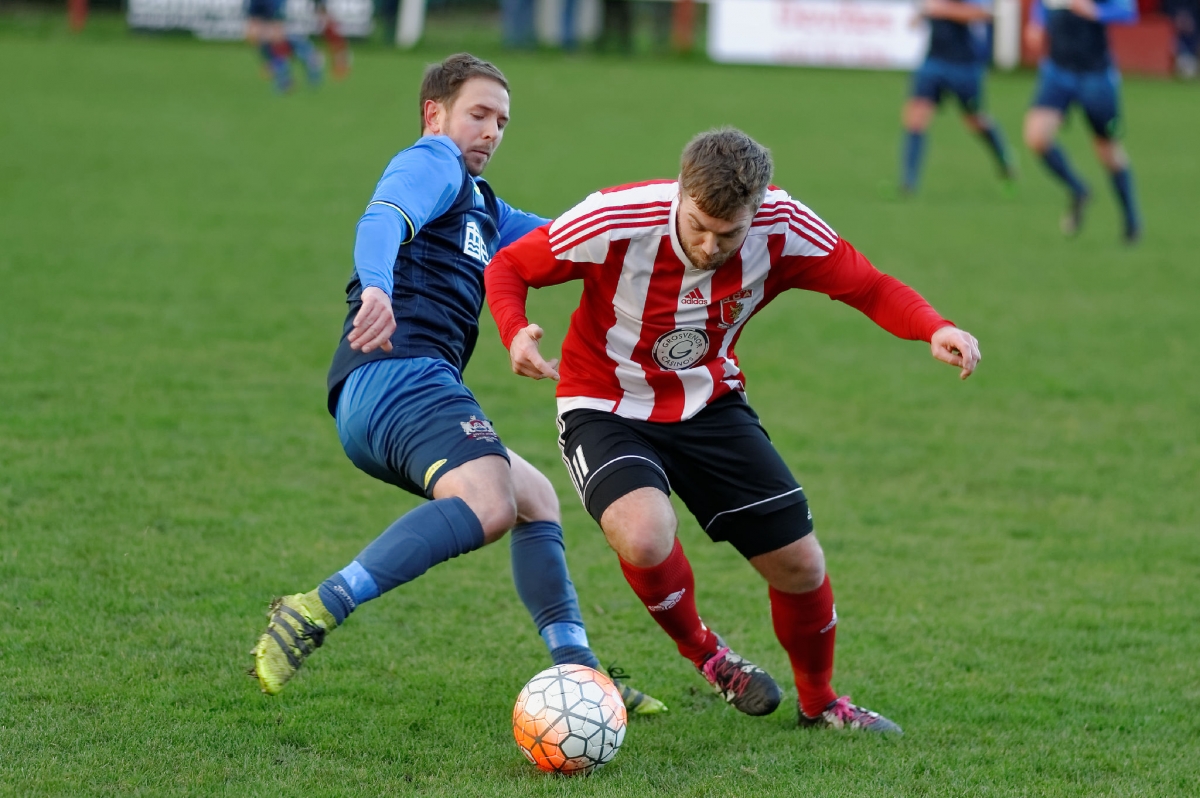 Michael Charlton evades a challenge during the first half of the match.

RCA made two changes to the side knocked out of the League Cup at Whitley Bay on Tuesday, with Clayton Davis and Michael Charlton replacing James Cassidy and Nathan O'Neill.

RCA had the first real chance of the match in the eighth minute, as a ball was well controlled by Callen on the left, who played in Charlton, who, in turn, released Richardson who finished well past McLaren but the flag was up for offside. One minute later and Banks made a good run down the right before cutting in and firing a shot over the crossbar from the apex of the penalty area. Three minutes later and good play from Armstrong in central midfield before playing the ball out to McGuinness on the left, whose cross was fired over by Charlton. In the 17th minute, RCA were close to opening the scoring - Page did well in midfield before playing the ball out to Callen on the left, who delivered a super, low cross into the six-yard area where Richardson’s shot from point-blank range was brilliantly turned onto the underside of the crossbar with a reflex save from McLaren and the loose ball was cleared. Two minutes later and RCA won a free-kick for a foul on Charlton on the Aycliffe byline. Armstrong whipped in the free-kick and Preston sent a powerful header just wide of the post from eight yards.

In the 21st minute, Aycliffe produced a good move through midfield and Matthews drove a shot from the edge of the penalty area which took a big deflection and went behind for a corner. From the corner, Oliver flicked a glancing header wide of the far post. Three minutes later and Banks again made a driving run down the right before playing in Kane, whose shot was well saved by Finch for a corner which was cleared. Aycliffe were having a good spell in the match, and one minute later, Hutchinson received the ball on the edge of the penalty area and fired in a shot that took a looping deflection off Preston and bounced off the top of the crossbar and behind for a corner. From Lane's corner, Costello sent a flicked header wide and out for a goal-kick. In the 33rd minute, a ball over the RCA back line put Stephenson in on goal but his shot from just inside the penalty area hit the side netting under pressure from Preston. Six minutes later and Matthews played a good ball into Hutchinson, whose shot was blocked for a corner which was cleared by Hodgson. And two minutes on and Callen delivered a second terrific low cross from the left and Page's shot was saved by McLaren, again from very close range.

During the interval, RCA made their first substitution, with Colin Larkin returning to the side in place of James Armstrong. In the 51st minute, Larkin was in the action as his shot was saved by McLaren and then Callen had a follow-up attempt cleared off the line. Two minutes later and a ball in from the left found Callen in the penalty area and, again, his shot was cleared off the line. One minute later and Banks made a super run up the right wing and won a corner which was cleared. RCA then broke and a lovely exchange of passes between Larkin and Callen resulted in a terrific shot by Callen from 25 yards that went just wide. In the 58th minute, Larkin sent a dangerous cross into the Aycliffe penalty area, where Richardson got underneath the ball and lifted it over the crossbar. One minute later and the lively Banks fired in a shot that went across the face of goal, with no Aycliffe player able to get on the end of it.

On the hour mark, RCA won a free-kick midway inside the Aycliffe half for a foul on Richardson - Noble's free-kick dropped to Preston, who fired a shot wide of the post from ten yards. Two minutes later and a ball over the top found Davis who drove to the edge of the penalty area, before firing in a shot that produced a super save from McLaren. From the loose ball, Davis hit the post with a follow-up attempt virtually on the byline. In the 65th minute, Greg Swansbury replaced Luke Richardson. As the match entered the final 15 minutes, Davis crossed from the right and Callen got under the ball and lifted it over the crossbar from 12 yards. In the 77th minute, Nathan O'Neill replaced Michael Charlton. Three minutes later and Noble made a good run before playing the ball out to Davis, whose cross was blocked for a corner which was cleared. And in stoppage time, RCA had a final chance to win the match as a Larkin shot was again well saved by McLaren for a corner which was cleared.

An entertaining match - for all it ended goalless - with plenty of chances for both sides. The corresponding fixture last season also finished goalless.

This was RCA's first clean sheet since the 4-0 home win over Billingham Synthonia on 7 October and the first time RCA have failed to score in a match since the 2-0 defeat at North Shields the previous week, 30 September.

This afternoon's RCA man of the match was chosen by Ryan Green. Ryan picked Ross Preston for “a great game and a solid performance”. Well played, Ross!

Next up for RCA is the second of three matches in a row at Meadow Park, as league leaders Morpeth Town are the visitors as the two sides meet for a second attempt after the original fixture was abandoned due to fog after 53 minutes on 26 September, with Morpeth leading 2-0. The rearranged match is this Tuesday, 28 November, with a 7:30pm kick-off.