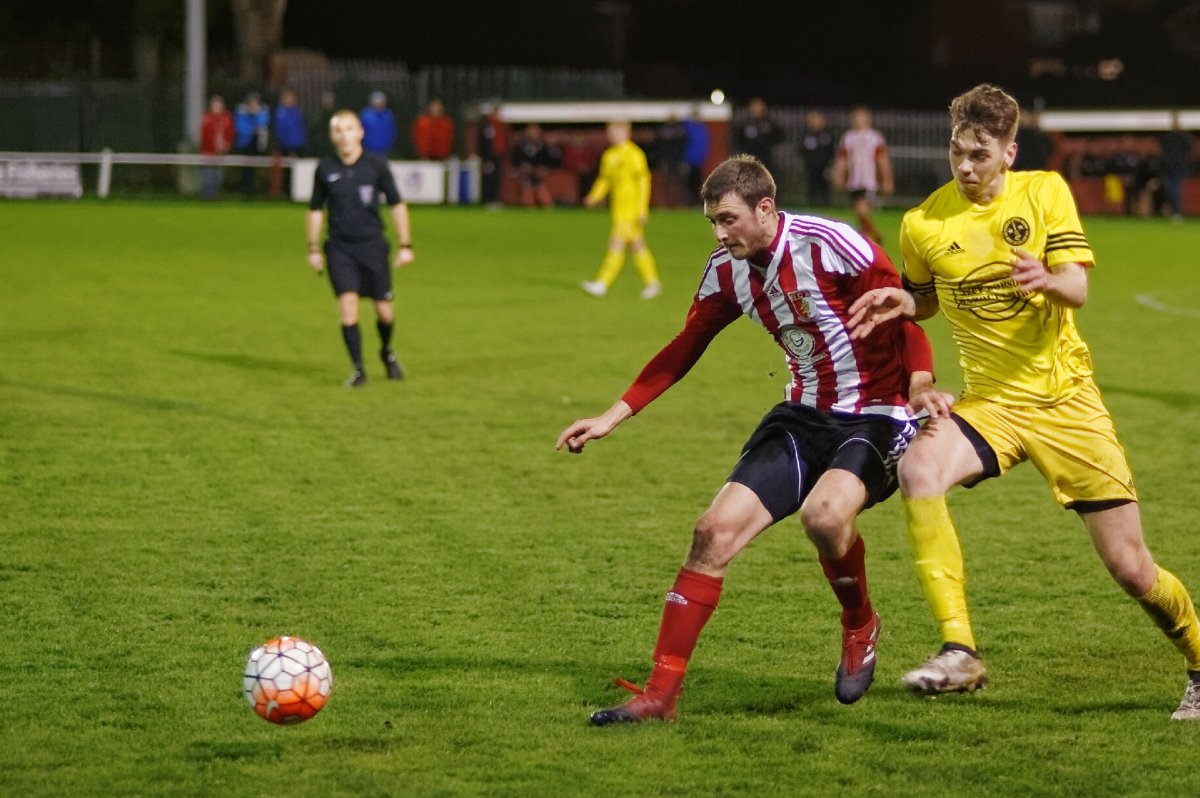 Nathan O'Neill on the ball during the first half of the match.

Sunderland RCA welcomed West Auckland Town to Meadow Park for a match brought forward from Saturday due to both sides’ involvement in the FA Vase.

RCA made three changes to the side that lost at Seaham Red Star on Saturday - in came Luke Richardson, Ross McNab and James Cassidy, replacing Reece Noble, Adam McGuinness and Michael Charlton.

There was little to report until the 10th minute, when RCA were forced into an early substitution as James Armstrong replaced the injured Colin Larkin. Two minutes later and West won a free-kick for a foul by Page which was cleared. And two minutes later, this time it was Page who was fouled but, again, the free-kick was cleared. Midway through the first half and Callen made a driving run down the right, forcing a corner - from Elliott's corner, Callen headed narrowly wide from 12 yards. In the 31st minute, RCA won a free-kick for a foul on Cassidy. From Armstrong's free-kick, O'Neill's header produced a terrific save from Bell and, as Hodgson challenged for the ball, strong appeals for a penalty were ignored. Two minutes later and West had a great chance to open the scoring as a stray pass from Hodgson fell to Wood, who raced through central midfield and to the edge of the penalty area before slotting the ball past the advancing Finch but wide of the post. In the 41st minute, the visitors had the lead - West were awarded a free-kick down their left for a foul by Preston. The free-kick was whipped in with pace by Mitchell, and Parker helped the ball on and into the net. Two minutes later and RCA won a free-kick for a foul on O'Neill. Armstrong whipped in the free-kick and Callen’s header was tipped over the crossbar by Bell for a corner which was cleared to end a half littered with fouls and free-kicks from both sides.

RCA, a goal down, but now kicking down the slope, began the second half strongly and equalised in the 49th minute - RCA won a free-kick for a foul on O'Neill. Armstrong whipped in a super free-kick and Page rose to head home with a terrific header. Three minutes later and Wearmouth made a driving run down the right but his cross was cleared by Preston. In the 59 minute, Elliott played a good ball out to Callen on the right who drove forward before firing in a shot that was parried by Bell. From the loose ball, O'Neill's cross was headed behind for a corner. On the hour mark, Wood controlled a good ball up to the edge of the penalty area before crossing to Francis who sent a looping header over the crossbar. Four minutes later and Callen played the ball out to Page on the right, who whipped in a brilliant cross that Cassidy, at full stretch, got underneath and the ball went over the crossbar.

In the 67th minute good play by substitute Morris as a cross was blocked by Richardson and a follow-up shot was saved by Finch. Three minutes later and Connor received the ball 25 yards from the RCA goal before twisting and turning and firing in a fierce, goal bound effort that was well blocked by Preston. Two minutes on and Callen made another driving run down the right and fired in a terrific cross that O'Neill couldn't quite direct towards goal. It was end-to-end stuff by this stage as West went back on the attack in the 76th minute when a shot from Wood was turned behind for a corner by Finch. From the corner, Parker rose to head the ball off the crossbar and the ball was cleared. In the 80th minute, RCA made a double substitution, with Reece Noble and Adam McGuinness replacing Luke Richardson and Nathan O'Neill. In stoppage time RCA won a free-kick for a foul on Page on the halfway line. Armstrong's free-kick fell to Callen, whose shot was deflected behind for a corner. From Elliott's corner, Page rose again to head in RCA's winner amid great scenes of jubilation.

Another excellent win tonight - RCA's 10th in 18 Northern League matches, moving us up to 7th in the table with an impressive 32 points already on the board. To put this into context, it took RCA 25 league matches to reach 34 points last season, when we beat Whitley Bay 2-0 on 17 December. Hopefully the lads can continue this excellent form throughout the whole season and push for a high position in the table.

There were many parallels tonight with the recent home match against Ashington, with RCA coming back from a goal down against a very good side and showing great resilience to win both matches 2-1.

Tonight's RCA man of the match was chosen by Joe Dixon. Joe picked Luke Page for “one of the best all round midfield performances of the season. Two goals, good tackling and many creative passes - a quality performance”. Well played, Luke!

Next up for RCA is a trip to Runcorn Linnets for the FA Vase Second Round tie on Saturday, 11 November with a 3pm kick-off.