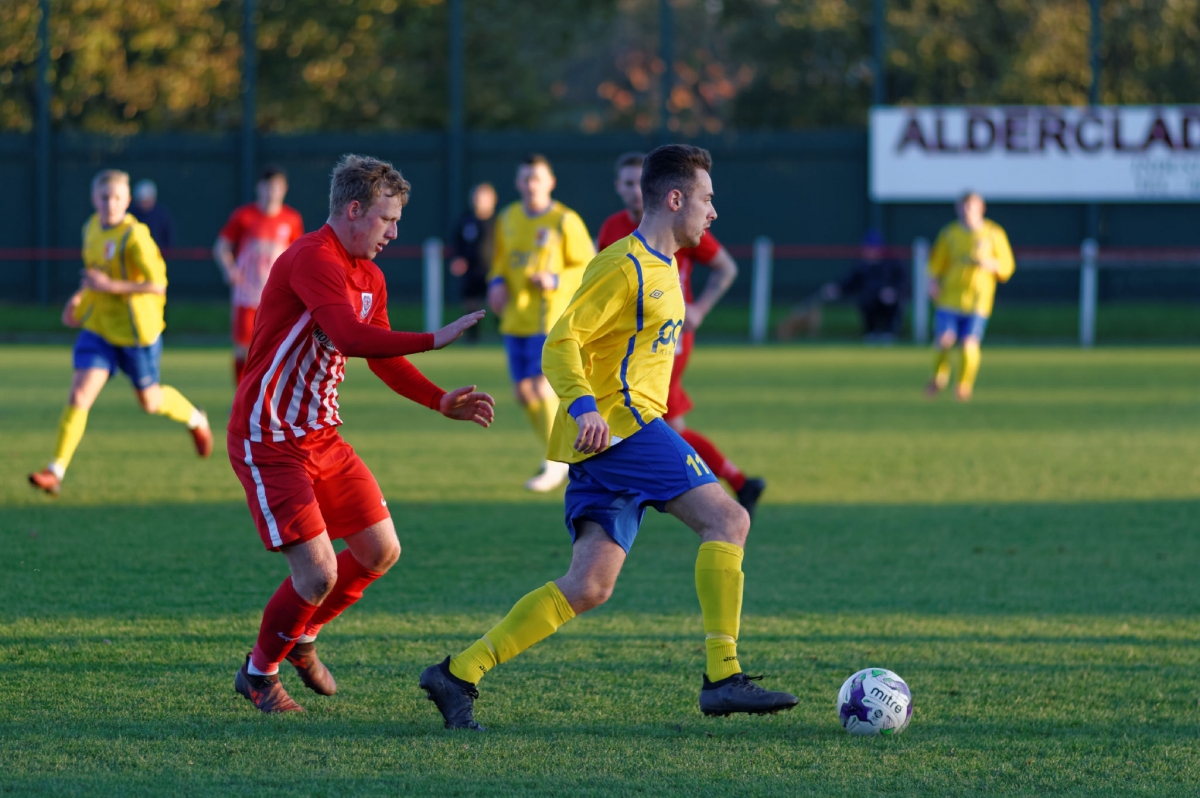 Stephen Callen got RCA off to the perfect start with two early goals.

Sunderland RCA made the short trip to Seaham Red Star for this afternoon's Northern League fixture. The two sides had met at Meadow Park just 11 days earlier, with RCA winning a close Durham County Challenge Cup match 3-2. Since then, Red Star have played one match - a goalless draw at Billingham Synthonia. RCA, too, have played one match since, a 2-1 win over Ashington at Meadow Park last Saturday.

RCA made one change to the side that beat Ashington last Saturday, with Dylan Elliott replacing Jonathan Davis.

RCA could hardly have got the match off to a better start, scoring two in the first three minutes - with 90 seconds on the clock, Callen made a good run down the left and won a corner. From Elliott's corner, O'Neill headed the ball onto the face of the crossbar and Callen latched onto the rebound to finish inside the six-yard area. Barely a minute later and O'Neill regained possession and made a good run down the right before crossing low to Callen, who, again, finished inside the six-yard area. In the sixth minute Seaham produced a good move which resulted in a shot from McBryde from 25 yards that was comfortably held by Finch. Six minutes later and RCA won a free-kick for a foul on Charlton. McGuinness whipped in the free-kick which was held by Harkess under pressure from O'Neill. In the 15th minute, Ramshaw made a good run down the right but his low cross went right across the six-yard area to Bird on the left, whose cross was headed clear by McGuinness. Five minutes later and RCA had a great chance to make it three - Ramshaw made a good run which was well challenged by Hodgson and the ball was played up to Larkin who lifted the ball over the advancing Harkess and over the crossbar.

Midway through the first half and James Cassidy replaced the injured Michael Charlton. In the 33rd minute, Callen made a good run down the left, squaring the ball to Elliott, who fired a shot wide from 20 yards. And three minutes later, Callen and Elliott were again involved, playing a neat one-two and Elliott shooting over the crossbar from the edge of the penalty area. In the 42nd minute, a ball from defence was played up to Bird, who fired over the crossbar from 25 yards. With half-time looming, RCA were awarded a penalty as Elliott played the ball into O'Neill, who was tripped running away from goal. O'Neill smashed the ball off the face of the crossbar and it rebounded to safety. Within seconds Seaham had a foothold in the match as Hodgson received the ball and curled a terrific effort into the corner from 20 yards.

In the 53rd minute, RCA won a free-kick for a foul on Cassidy which was headed towards goal by O'Neill but was comfortable for Harkess. Three minutes later and RCA restored their two goal lead as the ball was played up to Larkin on the right who brilliantly chipped Harkess with a superb finish. One minute later and Seaham won a free-kick which was half cleared to Ramshaw who fired in a shot that was held by Finch. In the 70th minute, Scorer headed narrowly wide from a corner on the right. Two minutes later and Red Star were back in the match as a cross field ball was chested down by Bird in the penalty area before firing in a super finish into the far corner of the net. And five minutes later it was all square - a stray pass from Larkin was picked up and, although Finch made an excellent save from the first shot, substitute Chapman was on hand to slot away the loose ball. In the 82nd minute, Cassidy played the ball up to O'Neill, who found Callen whose shot from the edge of the penalty area went wide of the post. Five minutes later and Seaham won a free-kick 25 yards from goal and Chapman curled a brilliant free-kick over the wall and right into the top, right corner to complete a superb comeback and end RCA's unbeaten run.

This afternoon's RCA man of the match was chosen by Gee. Gee picked Nathan O'Neill for his “excellent work rate”. Well played, Nathan!

Next up for RCA is West Auckland Town at Meadow Park on Tuesday, 7 November, kick-off 7:30pm.