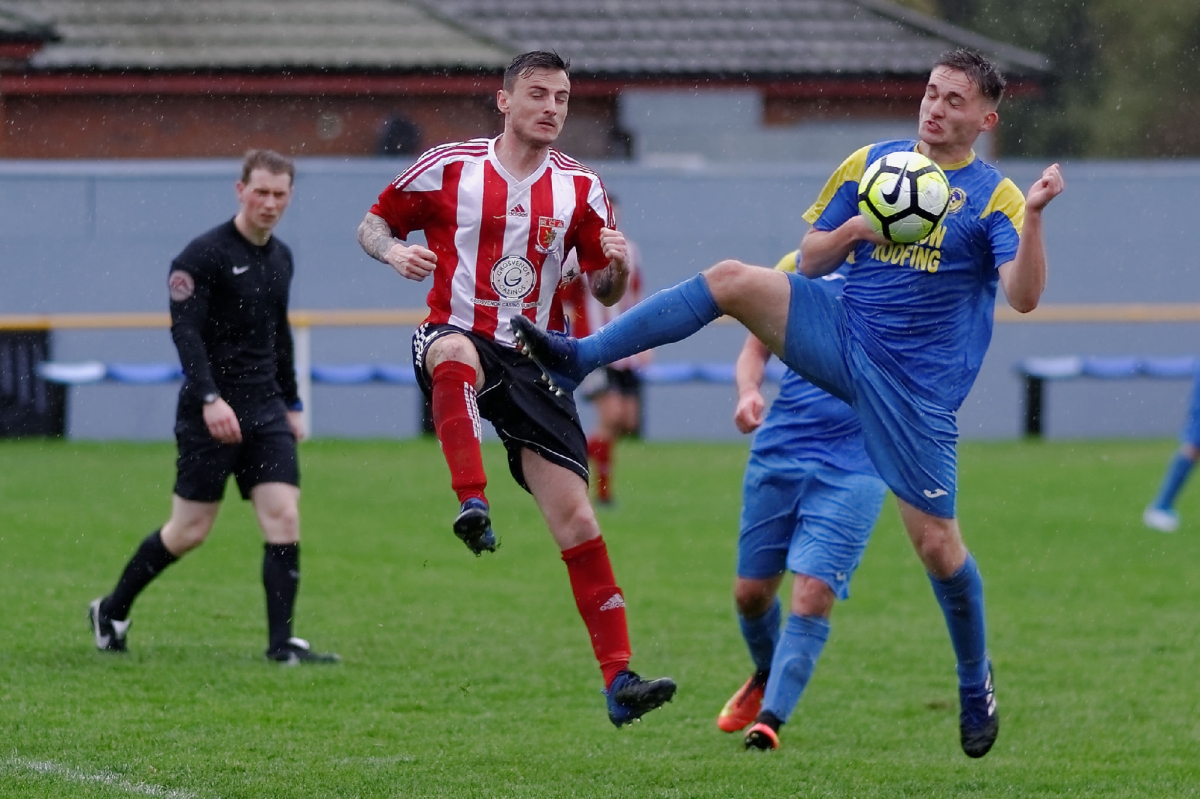 Sunderland RCA made the short trip to Boldon this afternoon to take on Jarrow Roofing.

RCA made two changes to the side that drew with Dunston UTS in midweek - Luke Page was suspended after receiving five bookings and missed his first match of the season and James Cassidy was ruled out injured and were replaced by Jonathan Davis and Stephen Callen.

After a quiet start, Jarrow took the lead in the sixth minute - a long free-kick by Regan was headed up into the air by McNab and the ball was picked up by Martin who finished smartly into the far corner. It took RCA just two minutes to get back into the match as McNab played a ball down the left wing to Callen, who made a superb, driving run to the byline before crossing and O'Neill was on hand to sweep the ball home from close range. Two minutes later and Charlton was released in on goal but a terrific sliding challenge by Vipond prevented the RCA midfielder from getting a shot away. But one minute later RCA took the lead - a ball was played into Davis in midfield who fired in a screamer from 25 yards that flew into the net - a magnificent strike! In the 17th minute, Palmer made a good run down the left before firing a shot over Bussey’s crossbar. One minute later and Jarrow won a free-kick 25 yards from the RCA goal following a foul by Elliott - Knight's free-kick struck the wall and, as the ball dropped, Anderson fired in a cracking volley that flew just wide of the post.

Midway through the first half and Gardiner released Knight down the inside right channel and in on goal, but his shot across Bussey struck the base of the far post and was cleared. In the 27th minute, RCA won a free-kick for a foul on Callen by Anderson. The free-kick was floated to the far post where Preston lifted the ball over the crossbar. One minute later and Walton made a good run down the left and squared the ball to Knight on the edge of the penalty area who fired over the crossbar. Back came RCA in an end-to-end period of play as a good ball by Noble released Charlton down the inside right channel but his shot, under pressure from a Jarrow defender, cleared the crossbar. In the 34th minute, Knight fired in a shot from just inside the penalty area which was blocked by Preston for a corner which was cleared. Eight minutes later and Davis made a good interception in central midfield before playing the ball forward to Larkin, who raced onto the through ball but shot wide from just inside the penalty area. In the 44th minute, Elliott made a good run down the left before cutting the ball back to O'Neill whose shot was deflected behind for a corner which was cleared. One minute later, and with half-time imminent, the dangerous Knight was released down the inside right channel before driving into the penalty area and squaring the ball to Anderson who, from eight yards and with only the goalkeeper to beat, fired in a shot that was superbly blocked by Bussey, injuring himself in the process.

During the interval, Bussey was unable to continue and was replaced by substitute goalkeeper Keith Finch.

Jarrow emerged for the second half with all guns blazing - in the 49th minute, Knight cut in from the left and fired in a shot that was deflected over the crossbar for a corner which was cleared. One minute and Jarrow were level as Gardiner received the ball in the penalty area before playing in Knight who guided the ball into the corner of the net with a precise finish. And a further minute on and Knight again got a shot away but this time it was a scuffed attempt which was comfortably held by Finch. RCA had forgotten to come back out for the second half, and, in the 52nd minute, the pressure continued as Palmer fired in a shot that cleared the crossbar. And one minute later Knight made a driving run down the left and his attempted cross on the byline was blocked by Preston for a corner which was cleared by the head of Davis. In the 58th minute, O'Neill played a good ball to Charlton down the right, who played in Larkin, whose shot was well saved by Regan - from the loose ball, Elliott had a follow-up attempt again saved by Regan.

In the 67th minute, RCA won a free-kick right on the edge of the Jarrow penalty area after Larkin was fouled - Elliott's drove the free-kick low and wide of the post. Two minutes later and RCA made a second substitution, with Adam McGuinness replacing Ross McNab. And a further two minutes on and substitute Barnes delivered a cross that was half cleared by Noble and then Barnes fired in a spectacular volley which Noble again blocked for a corner which was cleared. In the 75th minute, Noble made a driving run down the right before crossing to Callen whose shot was deflected behind for a corner which was cleared. Two minutes later and Jarrow won a free-kick for a foul by Preston. Knight's free-kick took a deflection off the RCA wall and went over the crossbar for a harmless corner.

With ten minutes remaining, and the match still up for grabs, RCA came into the ascendancy - Larkin made a good run down the left before squaring the ball to Elliott in the penalty area, whose shot was deflected behind for a corner. From McGuinness’ corner, the ball broke loose and, during the ensuing scramble, the ball finished up in the net but the referee had blown for a foul on Regan. RCA weren't to be denied, however, and two minutes later, made the breakthrough - O'Neill broke down the left before crossing low to present Larkin with a two-yard tap-in at the far post. And three minutes later, the points were in the bag as O'Neill fired in a shot from the edge of the penalty area that was well saved by Regan, however, Elliott pounced on the loose ball to coolly slot the ball home. Incredibly, RCA grabbed a fifth in the 87th minute as Noble played in Charlton down the right who cut into the penalty area and was tripped and a penalty was awarded by the referee. O'Neill stepped up to customarily smash the ball into the net - as regular readers will know, your correspondent rarely singles out one player in what is a team game. But a special mention goes to Nathan O'Neill, who, after today's double, has taken his goal tally to 17 in just 18 games - brilliant stuff! (This was RCA's 20th competitive match of the season, however, Nathan was not involved in the matches against Penrith and North Shields).

Three late goals gave the scoreline a rather flattering look - but a win is a win and the unbeaten run is extended to four matches in a match in which both sides had umpteen chances to add to their respective goal tallies.

RCA scored five goals in a match for the first time since Saturday, 22 April - the 5-0 hammering of Consett at the end of last season.

This was RCA's 20th competitive match of the season, with 11 wins, 3 draws, and 6 defeats, scoring an impressive 43 goals and conceding 27. And this is despite an horrendous injury list a few weeks ago. Well done to all of the lads for an excellent season so far.

Dylan Elliott is the only player to have played in all 20 matches, starting 18 of them. Great stuff, Dylan.

This afternoon’s RCA man of the match was chosen by Dave Rochfort. Dave picked Reece Noble for “a solid performance and some timely interceptions”. Well played, Reece!

On Monday lunchtime we will find out our opposition in the Second Round of the FA Vase. The tie is scheduled to be played on Saturday, 11 November with a 3pm kick-off. Look out for an announcement on the website and on social media.

Next up for RCA is a big match in the Durham County Challenge Cup as we take on Seaham Red Star in the First Round at Meadow Park. Tuesday, 24 October, kick-off is at 7:30pm.