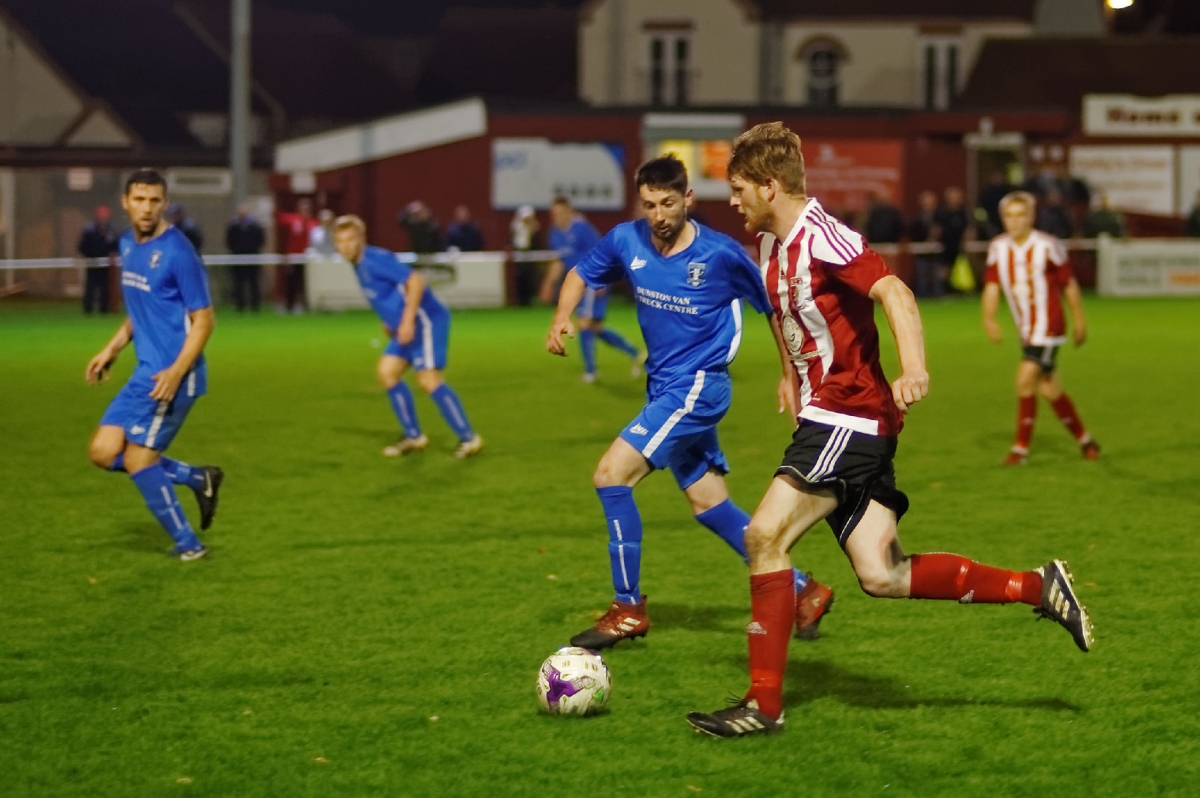 Following two good wins against Billingham Synthonia and Guisborough Town, Sunderland RCA were back in Northern League action tonight as fourth-placed Dunston UTS made the trip to Meadow Park.

RCA made one change to the side that won at Guisborough on Saturday - Ross McNab, injured at Consett on August Bank Holiday Monday, returned to the side in place of Adam McGuinness.

In the first minute of the match, Page turned well in midfield before releasing Cassidy down the left, who drove to the edge of the penalty area, but his cross was cleared. In the 4th minute, Dunston took the lead - a ball was played in to Liam Thear, who, from 25 yards, looked up and fired in a terrific shot that flew past Bussey and into the corner of the net. Three minutes later and RCA won a free-kick midway inside the Dunston half for a foul on Page. Elliott's free-kick was headed down by O'Neill in the penalty area and gathered by Harrison. In the 14th minute, RCA were unlucky not to equalise as Larkin played in Cassidy down the left, and from Cassidy’s cross O'Neill hit the underside of the crossbar and the ball was hacked clear. Six minutes later and Anderson made a good run down the left and delivered a low cross which was cleared by Preston for a corner, which, in turn, was cleared by Elliott.

In the 24th minute, RCA won a free-kick for a foul on Noble - from the free-kick, O'Neill headed the ball down to Cassidy whose effort was bravely smothered by Harrison at Cassidy’s feet. Six minutes later and Anderson fired in a shot from 25 yards which was straight at Bussey. In the 37th minute, RCA were again mighty close to an equaliser - a free-kick which was again taken by Elliott, the ball was cleared to the edge of the penalty area where Elliott fired in a cracking shot was superbly saved by Harrison, diving full length to his left for a corner. From the corner, the ball was flicked on by O'Neill and headed off the line by a Dunston defender. With four minutes to half-time, Dunston had a good chance of their own as a throw-in down the right was crossed into the penalty area by Elliott and Fitzpatrick rose well but headed the ball over the crossbar. In the 44th minute, RCA again hit the woodwork - Elliott fired in another super shot that this time beat Harrison, but the ball bounced back off the base of the post and Larkin, following up, had an effort saved by Harrison.

It was the away side who had the first chance of the second half as Anderson crossed from the left and Page headed the ball behind for a corner which Page again cleared with his head. In the 53rd minute, Fitzpatrick made a good run down the right and crossed to Liam Thear, whose shot from the edge of the penalty area was comfortably saved by Bussey. 12 minutes later and Charlton made an excellent, driving run down the right and crossed to the far post where Larkin guided a looping header back towards goal, only to see it headed clear a yard from the goal line. Three minutes later and Page played a good ball out to Larkin down the right who forced a corner as Harrison raced out of his goal to challenge the RCA striker on the byline. The corner kick was half cleared to Cassidy at the edge of the penalty area who drove a low shot wide of the right-hand post.

With the pressure on the Dunston goal increasing, RCA got a thoroughly deserved equaliser in the 70th minute - Page won the ball back for RCA with a terrific challenge midway inside the Dunston half, before exchanging passes with McNab and playing the ball forward to Charlton, who, from the edge of the penalty area, guided a shot across Harrison and into the far corner for a well-taken goal. Seven minutes later and Page played a ball out to Cassidy on the left, who drove into the penalty area and reached the byline before his cross was blocked for a corner - from the corner, the ball was cleared and Dunston launched a slick counterattack and Fitzpatrick fired in a shot which was saved by Bussey for a corner which was cleared. In the 79th minute, Cassidy went on a driving run down the left and forced another corner - Elliott's corner was headed narrowly wide by O'Neill inside the six-yard area. Five minutes later and a ball was played into Larkin, whose shot was blocked and Cassidy, from the edge of the penalty area, fired in a fierce effort that took a slight deflection and whistled over the crossbar for a corner which was cleared.

An excellent match, between two very good sides, and played at a quick tempo throughout - this was no bore draw! Both sides had chances to increase their goal tally, however, RCA will look back at hitting the woodwork twice, having a couple of efforts cleared off the line, and some terrific goalkeeping from Harrison and feel that one point should have been three tonight.

Finally, a quick word on the attendance tonight of 134, RCA's highest of the season in the league so far - for a midweek match, and on a night with Champions League football on the telly! (not including the 151 for the abandoned Morpeth Town match, of course). Excellent stuff, and thank you to everyone who turned up - if you liked what you saw tonight, tell your friends and family and come back for our Durham County Challenge Cup match against Seaham Red Star next Tuesday evening, 24 October, at Meadow Park.

Next up for RCA is a trip to Jarrow Roofing on Saturday, 21 October with a 3pm kick-off.