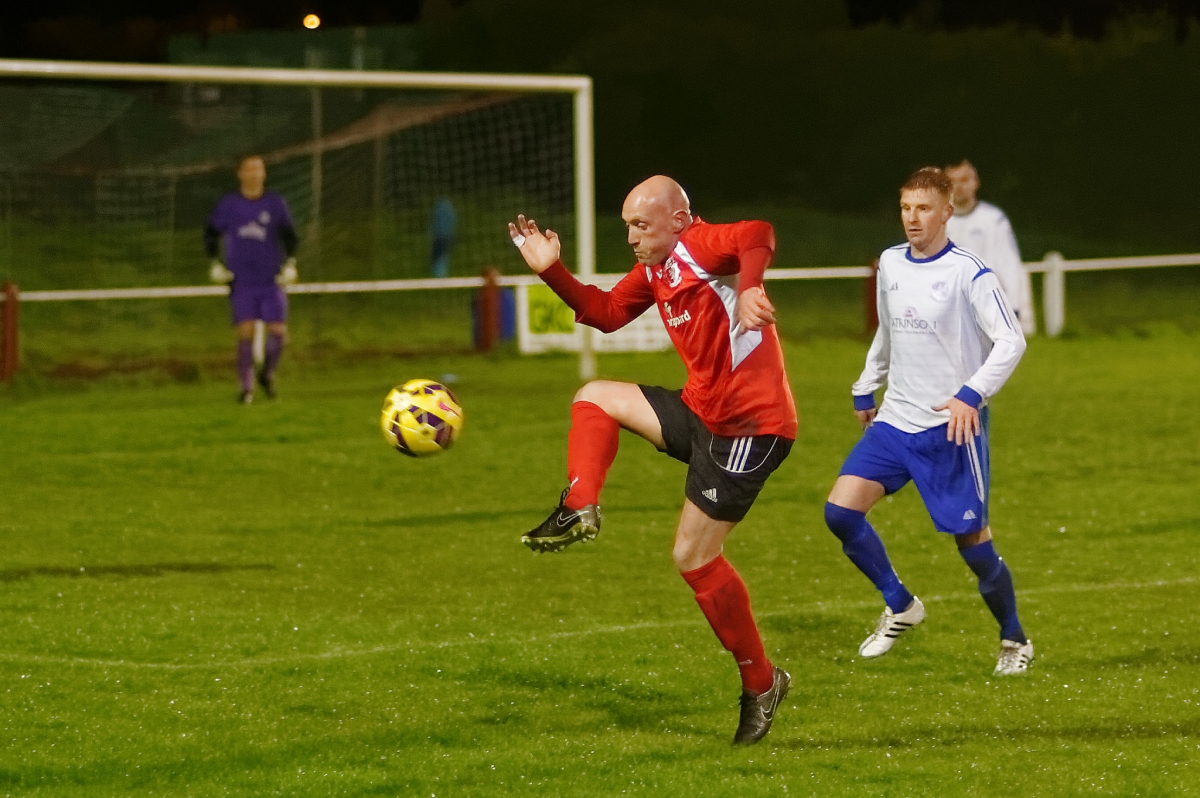 RCA's assistant manager Steven Stewart on the ball in the second half of the match. Photograph: Simon Mears.

Sunderland RCA’s final match of the season was a home game against Penrith.

Following successive defeats, RCA bounced back emphatically on Saturday with a superb 5-0 victory at Consett. Penrith, meanwhile, were beaten 4-1 at home to Whitley Bay on Saturday, but had a 2-1 win over Dunston UTS in midweek.

Tonight was the third time that the two sides had met this season: Penrith won the FA Cup Extra Preliminary round match on the opening day of the season courtesy of a single goal. But in December, again at Frenchfields, RCA won 2-0 in the league thanks to an own goal and a Liam McBryde strike.

RCA made four changes to the side that won at Consett on Saturday - Neal Bussey returned in goal with Jonathan Carmichael on the bench, Ross McNab replaced the injured Greg Swansbury, and Jonathan Davis and Brad Wilson replaced Craig Hubbard and James Armstrong in midfield.

The match kicked off on an awful night with driving winds and rain - RCA, kicking down the slope in the first half, had the first attack of the match. Callen made a good run down the RCA right and forced a corner which was cleared. In the 8th minute, Penrith had their first meaningful attack when Coleman made a driving run through midfield, cutting into the penalty area, and firing in a shot that was saved by Bussey. Three minutes later and RCA almost took the lead after a long ball from Noble was controlled well by Callen before turning and firing a vicious half-volley off the base of the post, which rebounded to safety. RCA then won a series of three successive corners, the third of which was half cleared to Davis who fired in a fierce, goal bound shot which was blocked and cleared.

Midway through the first half and Coleman made a run down the left but his cross was cleared by Noble. Five minutes later and Butler made a good run down the RCA right and cut into the penalty area before squaring a ball which was cleared. On the half hour mark, RCA produced a lovely bit of one touch interplay down the right between Noble, Charlton and Butler which freed Butler but his cross was blocked for a corner. Three minutes later and Veitch made a run down the left, crossing to Coleman on the edge of the penalty area, whose shot was saved by Bussey diving to his right. As half-time approached, Penrith won a free-kick after a foul on Lawson by McGuinness - the free-kick was met by a powerful header by Coleman which was saved by Bussey, but the referee had already blown for a push.

The second half was slow to get going with no chances created for either side in the opening minutes. In the 55th minute, a cross from the right from Noble was headed down into the six-yard area by Butler but was cleared. Two minutes later came the pivotal moment of the match - Penrith were awarded a penalty after a foul by McGuinness, who was shown a straight red card. Coleman stepped up to convert the spot kick to give the visitors the lead. It looked like RCA were going to be up against it, a man and a goal down, however, just seven minutes later and the scores were level - Davis put Callen in on goal and the RCA striker grabbed his 22nd goal of the season from an acute angle. Three minutes later and RCA should have had the lead after Callen was put through on goal but his shot was saved by McCombe. And, seconds later, at the other end, Coleman was put in on goal and his shot was saved by Bussey.

As the match entered the final 15 minutes, Coleman made a run through midfield and played in Gardner whose shot was saved by Bussey. In the 81st minute, RCA again had a great chance to take the lead for the first time in the match - Noble crossed from the right and Charlton rose to see a terrific header hit the crossbar. The ball rebounded into the air and Charlton was penalised for a foul on the goalkeeper. Then, just two minutes later, Penrith had the lead when Read picked up a loose ball and fired in a superb 20-yard looping shot into the net. Penrith then had a further opportunity in the closing stages as Coleman made a run through midfield and found Lawson, whose shot was saved by Bussey. In the final action of the match, a long ball was held up by Callen on the edge of the penalty area, who played in Larkin whose shot was high and wide.

Stephen Callen’s goal tonight means that he joins Colin Larkin as joint top-scorers - both ending the season with 22 goals.

Epilogue: So the curtain falls on another Northern League campaign - my camera and I have been to every single RCA match this season (56) and have enjoyed almost every minute.

We started with a friendly victory at Richmond Town on 16 July and finished with a defeat to Penrith nine months later. In between there have been many highlights which I'm sure fellow fans have enjoyed just as much as I have - the victory at Newton Aycliffe demonstrated the tremendous team spirit we have in the squad, coming back from 2-0 down with half an hour to go to win 3-2.

December was an awesome month which began with my performance of the season at Dunston in the FA Vase and a majestic Colin Larkin hat-trick. The low point was also in the Vase, losing to Newport Pagnell in extra-time after conceding a 96th minute equaliser. There were also further victories in December against Penrith, Whitley Bay, a derby win against neighbours Ryhope Colliery Welfare, and a second, and equally impressive, win at Dunston in the league.

We gave league champions South Shields two cracking games and should certainly have gained much more than a single point from them. We also gained draws from home games against North Shields and Morpeth, both of whom, along with South Shields, finished the season with over one hundred points.

And we also took four points off Consett, including last week's brilliant 5-0 win at Belle View, four points off Newton Aycliffe, beat a resurgent Whitley Bay at home and did the double over Bishop Auckland, demonstrating that RCA can match just about any side in the league on our day. Only Shildon, Marske United, Newcastle Benfield and Jarrow Roofing have left us empty-handed this season.

An excellent season then for RCA with a second-best ever finish in Division One of the Northern League as well as reaching the Fifth Round of the FA Vase for the second successive season and losing in the Quarter Final of the League Cup.

RCA will more than likely begin the new campaign with an FA Cup Extra Preliminary match on 5 August, but keep checking the website for the new fixtures as well as pre-season friendlies which are currently being arranged.

Have a great summer.

Sure I speak from all at the club and all RCA supporters on congraulating and thanking Simon for the great reports produced and photos taken.

Here's to more next season...

Cheers Mike - I think all of the club's volunteers deserve a big pat on the back. It's a labour of love. The players quite rightly grab the headlines, but the club couldn't exist without volunteers