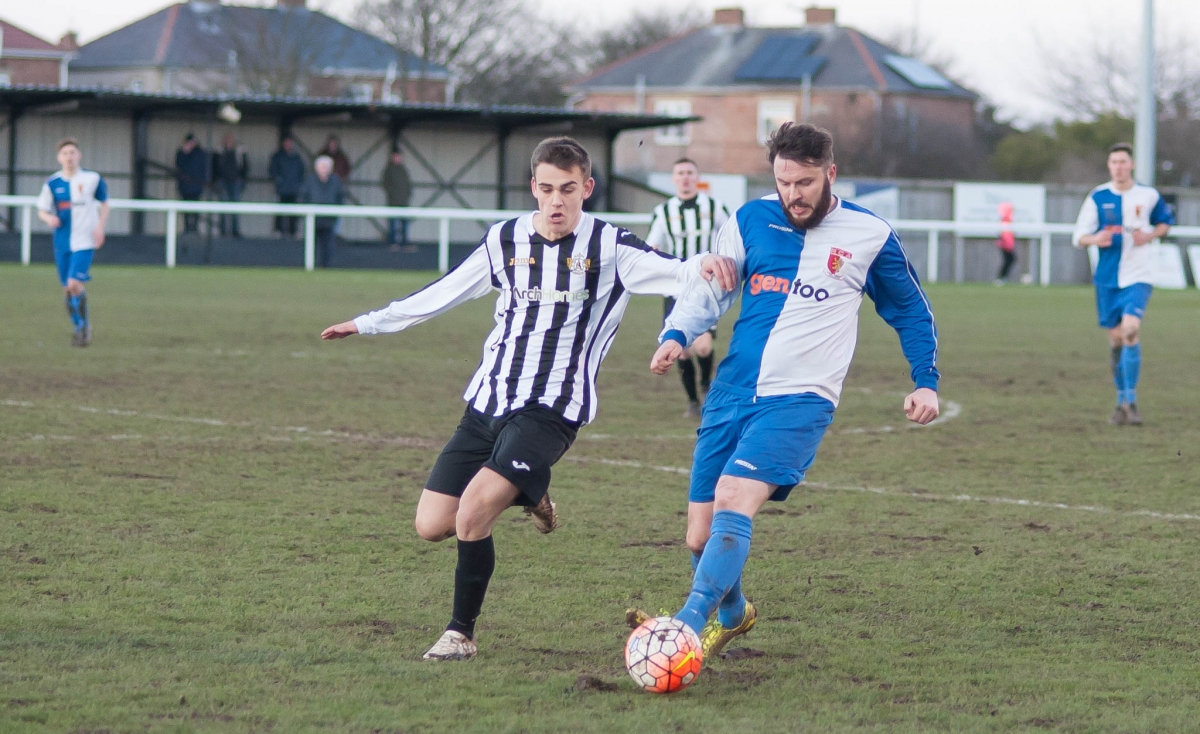 On a bright but chilly afternoon RCA got the first chance of the match as Richardson made a run and cross down the right which was controlled by Cassidy, who exchanged passes with Callen before shooting into the side netting from a tight angle. Four minutes later and Ashington had their first attack when a free-kick was delivered into the RCA penalty area where Buchanan’s header at the far post was saved comfortably by Carmichael. In the 9th minute RCA had an excellent chance to open the scoring. Callen picked up the ball midway inside the Ashington half and drove towards goal before playing in McBryde, who released Charlton inside the penalty area but his shot was well saved by Grant. Two minutes later and Henderson made a run down the Ashington right before crossing to Salmon whose acrobatic volley went wide. There then followed a rather scrappy passage of play as both sides misplaced passes on a heavy pitch.

In the 20th minute Ashington won a corner after Swanbury blocked an effort by Harmison. The corner was cleared first by the head of Swansbury and then by the boot of Richardson. Three minutes later and McBryde released Charlton down the right - his cross was met by Cassidy but the shot was blocked by Grant. One minute later and McBryde was again in the action after a solo run and shot was saved by Grant. From there Ashington went straight back on the attack as Harmison made a run down the right before squaring the ball to Downey but Carmichael was alert to the danger and rushed out to smother the ball. On the half hour mark Harmison and Downey were again the danger men for Ashington as Harmison played in Downey through the middle but his shot was charged down by Carmichael.

In the 35th minute RCA took the lead with a lovely move. Cassidy picked up the ball on the left before playing it inside to Noble, who switched play to Richardson. Richardson then played in Charlton down the right whose cross was initially met by Richardson - who had continued his run into the penalty area - and was blocked by Grant but the loose ball fell to McBryde who tapped in from four yards. Two minutes later and RCA almost doubled their lead as Richardson crossed into McBryde but his shot was blocked for a corner. And Richardson was again the provider two minutes later as his cross was fired over the crossbar by McBryde. With two minutes until half-time RCA doubled their lead as Callen won a challenge down the right and advanced to the edge of the penalty area before squaring the ball to McBryde who made no mistake from eight yards.

The Ashington lads were back out and on the pitch fully five minutes before the restart - presumably with strong words from the manager still ringing in their ears!

The second half got underway and Ashington immediately showed their intent - winning a corner that was cleared by Swansbury. Five minutes later a shot from Bell went just over the crossbar. It was all Ashington at this stage and two minutes later Pearson made a run down the left but his shot again went just wide. In the 56th minute Ashington got a goal their early play in the second half warranted. A cross was played into the penalty area to Pearson who went to ground with Hodgson in close attention - the referee pointed to the spot and Downey stepped up to score via the post. Game on.

Ashington continued to attack with vigour and on the hour mark a cross by Henderson was cleared by Hodgson. One minute later and RCA launched their first meaningful attack of the second half as Callen made a run down the middle before exchanging passes with Cassidy, but his deflected shot was cleared.

Three minutes later and Ashington were level as substitute McAndrew made a run down the left before cutting into the penalty area and slotting the ball past the onrushing Carmichael. Midway through the second half and RCA substitute Butler made a run down the right and won a corner. The corner was half cleared to Swansbury who shot wide. In the 73rd minute RCA had a great chance to retake the lead as Callen released Butler in on goal but his shot was saved by Grant for a corner which was cleared. Four minutes later and Ashington had the lead for the first time - again substitute McAndrew was involved as his cross from the left was met by Harmison whose header hit the inside of the post and nestled into the corner.

As the match entered the final ten minutes RCA tried to salvage something from the match as McGuinness’ cross from the left was met with a rasping half-volley from Charlton which went just wide of the post. Two minutes later and Callen made a run down the right and crossed towards Butler but Grant intercepted the ball to snuff out the danger.

The proverbial game of two halves - RCA were the better side in the first half, Ashington were much-improved in the second.

Next up for RCA is the Brooks Mileson Memorial League Cup, Quarter Final against Marske United this coming Tuesday, February 7th, kick-off 7.30pm. This is the only Northern League fixture on Tuesday evening - so get along to Meadow Park and support the lads, safe in the knowledge that, unlike last Saturday at Newport Pagnell, there will be no extra-time heartbreak to endure - the match will go straight to penalties if the score is level after 90 minutes.